NEXT UP IN SEX

This multi-part series will follow me, a normal dude with no experience or interest in feet fetishism, as I try to make a living by selling unique pictures and videos of my feet.

I have no idea what will happen over the next 6 months. Things are bound to get weird and exhausting, but I’ll be back every month with new insights from diving feet-first into the world of selling fetish media.

It started as a joke. An off-the-cuff comment made to my friend, expressing frustration with my latest in a string of shitty jobs that pay nothing but ask for everything.

“Oh God, I am an inch away from selling feet pics.” I said.

“You’d make a lot of money doing that.” She flatly stated. She would know, since a major portion of her income flows from sites like Only Fans.

“Huh, really?” I asked, surprised at her inflection. “I know ladies can make a lot doing that, but what about dudes?”

The thought stuck in my brain as I went to help a customer at the register. Scanning and bagging boutique foods I could never afford, the customer draped in athleisure and jewelry asked if I was the owner. It was a common question thrown my way since at 34 with greying hair and a wedding ring I was the oldest person working there. Still hurt every time it was asked.

I had flirted with the idea of doing something like cam shows when I was broke and single, but now that I’m broke and married there was no way sex work of any kind was an option. Besides, with an aggressively average package and doughy body, the only way camming would bring in the big bucks would be doing a lot I’m uncomfortable with.

Still, I was curious. I quickly googled “can guys sell…” and autofill immediately finished with “feet pics.” 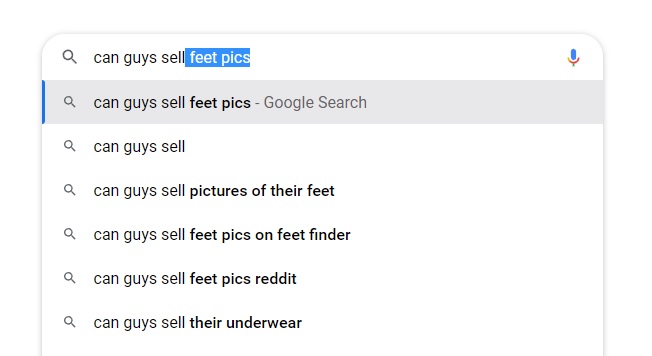 Wow. Either this was a case of big tech listening in or enough guys had the same question.

Either way, our economy was definitely screwed.

Living in the dying empire of America in late-stage capitalism, it shouldn’t be that shocking that millions of struggling men had thought of selling their bodies. Or parts of their bodies. It’s not like 99% of jobs provide a sense of dignity or a living wage.

With the highest rates of income inequality in history, workers’ rights are being chipped away daily. There is no US city where a full-time minimum wage job can pay for an apartment. For Millennials, the highest educated and hardest working generation, owning a home is considered a pipe dream.

We can’t even have hobbies without trying to monetize them. Our lives are entirely consumed with earning enough to scrape by as we are called “entitled” for wanting our at least 40-hour work-week to cover basic necessities.

I mean, if you’re going to whore yourself out, it may as well cover rent.

There is still a puritanical stigma around sex work. That is at least socially. In the era of “rise and grind”, however, it is oddly encouraged.

With some more research, I saw dozens of articles detailing how to trade pictures and videos of feet for cash. Not only were many of them almost identical in their writing, but they were eerily similar in tone. All of these articles talked about fetish commodities like it was driving for Uber.

Yep. Just another side gig… no different from Instacart or Fiverr. What the hell is going on?

I couldn’t stop thinking about it. The last few years have felt like living in a Verhoeven-esque satire, and the pedestrian treatment of fetish-focused sex work fits in perfectly. It’s easy to visualize a gag in the background of Robocop or Total Recall featuring corporate-owned full-release pedicures.

How did something considered taboo and strange like foot fetishes turn into a viable path to financial freedom? What does this say about our modern society, where disgustingly underpaid nurses and teachers have been fired for trying to make ends meet on Only Fans or stripping when there’s this much of a demand from consumers?

The hypocrisy isn’t new, but the vibes surrounding it are.

As a contributing writer for Philadelphia Weekly’s Sex/Dating and LGBTQ+ sections, this topic seemed like a good pitch on its own. I could try to interview male foot models, research the data on income from online sellers versus the stagnant wages of “real” jobs, and crack some jokes mixed with pretentious conjectures.

That didn’t feel like enough, though. Something was missing.

While I have written about sex work and always made sure to show that sex work is real work, I lacked any tactile experience. Should I just bite the bullet and try becoming a toe-hoe™?

With about a decade of standup comedy experience, I’ve arguably done more humiliating things for attention. But, feet are just not my thing. No judgment for those that are into them but I don’t get it. The idea of going all “f*ck my lubed-up soles, daddy” bores me and would get tedious fast.

Then it hit me. Possibly the dumbest idea I’ve ever had, and that is saying a lot.

All I needed to do was convince my wife to sign off on it.

Saying I wanted to sell feet pics was met with dead-faced silence. She gave me the usual response to one of my classic ADHD-fueled schemes, saying I don’t need her permission to do something.

She’s right. Usually, I can do whatever I want, but this felt different. I really wanted her approval. So, I gave her the pitch.

“I don’t want to do ‘sexy’ content,” I explained, “I want to see if I can gain a following doing weird funny stuff. Like a burlesque striptease with socks and have those twirly nipple things on my feet. Or do the Saturday Night Fever walk, and halfway through the floor is covered in Legos. More googly eyes than baby oil.”

She starts giggling a bit.

Any married person can tell you if their partner is laughing, you’re off the hook.

“I want to go deep into this world and write about how trying to make money this way affects my day-to-day life. I want to interview experts on economics, technology, sex workers’ rights, politics, and mental health. You know, pick apart modern life through the lens of sex and commerce.” I explained.

If I have one talent, it’s rationalizing a bad idea.

She liked the concept and the bigger ideas I wanted to discuss through it. The prospect of bringing in some money didn’t hurt, either.

I’ve always made way less than her, as she has built an impressive career with focus and hard work. My low-level income and lack of executive function are not as much of an issue as the inconsistency, which puts extra pressure on her.

Financial pressures have put a strain on our marriage. She is as kind and understanding as she can be, but sometimes it is too much. We are madly in love, but the position I unintentionally force her in to be the adult has distanced us from one another both emotionally and physically.

It’s not fair to her, and I’ve always been ashamed of it.

Ever the supportive spouse, she was on board.

Being the queen of puns that she is, we workshopped handles for the accounts I’d have to open. Landing on the right one was hard.

There were some great ones, including:

The list grew and grew as we laughed and tried to one-up each other.

After weeks of gauging with friends and co-workers what name was the funniest, one got a laugh every time: Quinten Tarantin-Toe. Not only a good pun but based on a famously foot-focused artist. That was the winner.

I thought, naively, that picking the right name would be the hardest part. To quote an over-rated movie, “I am not a smart man.”

Dipping My Toes In – An Introduction to Foot-Based Marketing

The first few days were fun. Sitting on my couch with two sleeping cats, ideas for content were flowing. Something missing from my film school days was weekly assignments to create short films, and this would be a great replacement. Something to keep me creatively agile.

My friend Nat has known me for almost a decade. She’s a brilliant comedy writer and one of the closest people in my life. I told her my idea, wanting her perspective. We’ve worked together on various projects over the years, so she knows my weak points. A major one is my disdain for self-promotion.

“You’re going to hate this” she said.

“What? It’ll be like to old days, making funny sketches and taking dumb things too seriously.” I said.

“I work in marketing, and I know how much you hate social media. Building a brand is a full-time job,” she explained.

Nat isn’t wrong. Social media influencers are seen as getting rich for doing nothing, but that “nothing” takes so much work. Constant posting, replying to comments and keeping an eye on algorithms and trends can burn someone out fast.

Intellectually, I knew all of this, but it didn’t really hit me until she pointed out the obvious.

The larger, heady implications of this project had me so excited that I had forgotten about the nuts and bolts. Part of me assumed all this would require was a single Only Fans account, and the content would draw people in.

It’s almost as if I hadn’t learned anything from a decade of obscurity and common sense.

While sites like Only Fans seemed to be the best place to show off my size twelves, the majority of sellers focus on private sales through major social apps like Instagram and Twitter. A few people highlighted in my initial research, ones that raked in thousands of dollars in their first month already had thousands of followers on something like YouTube, Twitch, or Tik Tok.

Looking at my own accounts, I haven’t posted anything on IG or tweeted in over a year. Both accounts had a handful of followers with one or two posts breaking a hundred likes. Reddit was my strongest account, thanks to two old posts that did okay with 12.5k upvotes.

If monetary success were to be possible, I would need to gain a major following from scratch.

Thinking about having to devote so much time and effort to social media turned my stomach. I had already sold the idea to so many people. Maybe this was all a huge mistake.

When I do something stupid, I go all in. Blame it on my Massachusetts upbringing.

So, here we go. Over the next few months, I will be chronicling my efforts to pay the bills with my feet. I’ll interview experts in fields surrounding sex, business, mental health, social issues, and philosophy. I’ll talk to folks with hands-on experience in making a living on the internet and how it has helped or hurt them.

What can this experience reveal about American life in the new “Roaring 20s”?

I’ll also cover how this project impacts my personal life, my relationships, and my mental health. Will I make any money at all or fall on my face? Will it help me be the partner my wife deserves or create new problems? Will all the hours spent online and interacting with customers build my confidence or just destroy me?

The only way to find out is by taking it one step at a time, putting one foot in front of the other.