Republican candidates for city offices in Philadelphia could be forgiven for looking on their task as an exercise in futility. But there was more reason for hope than usual this year, with the Democrats’ least popular official, District Attorney Larry Krasner, at the top of the ticket.

Krasner, like Mayor Jim Kenney, has presided over a city that few can honestly say has improved under his leadership. As chief law enforcement officer in Philadelphia, Krasner faced reelection in a town that was demonstrably less safe and more crime-ridden than it was four years ago. Would that hurt his cause?

Not really, as it turns out. Krasner received 150,330 votes in 2017, 74.70% of the total. This time, with turnout slightly increased, he got 154,505 votes, or 71.77% according to unofficial tallies from the city commissioners’ office. That’s what skyrocketing murders and widespread rioting cost the DA: three percent of the vote. Maybe if the city burns to the ground he’ll get pushed down to only two-thirds of the vote next election.

But a more optimistic view of the situation is that as low as the Philly GOP is now, they are actually trending in the right direction. Jim Kenney was elected in 2015 with 85.36% of the vote. By 2019, that total fell to 80.33% despite a lack of funding or serious campaigning by his opponent, Billy Ciancaglini. These are all still blowout numbers, but there is a slight improvement. Are people getting tired of Democrats generally, or just sick of these two clowns?

A look at the accompanying map tells us some of the story. As usual, almost the only areas Krasner’s Republican opponent, Charles Peruto, won are in the Northeast, South Philly, and Roxborough. But as this map shows, Peruto expanded the Republican map compared to how Ciancaglini performed two years earlier. While Kenney narrowly carried Northeast Philly as a whole, Krasner lost the region 63.79% to 35.97%. 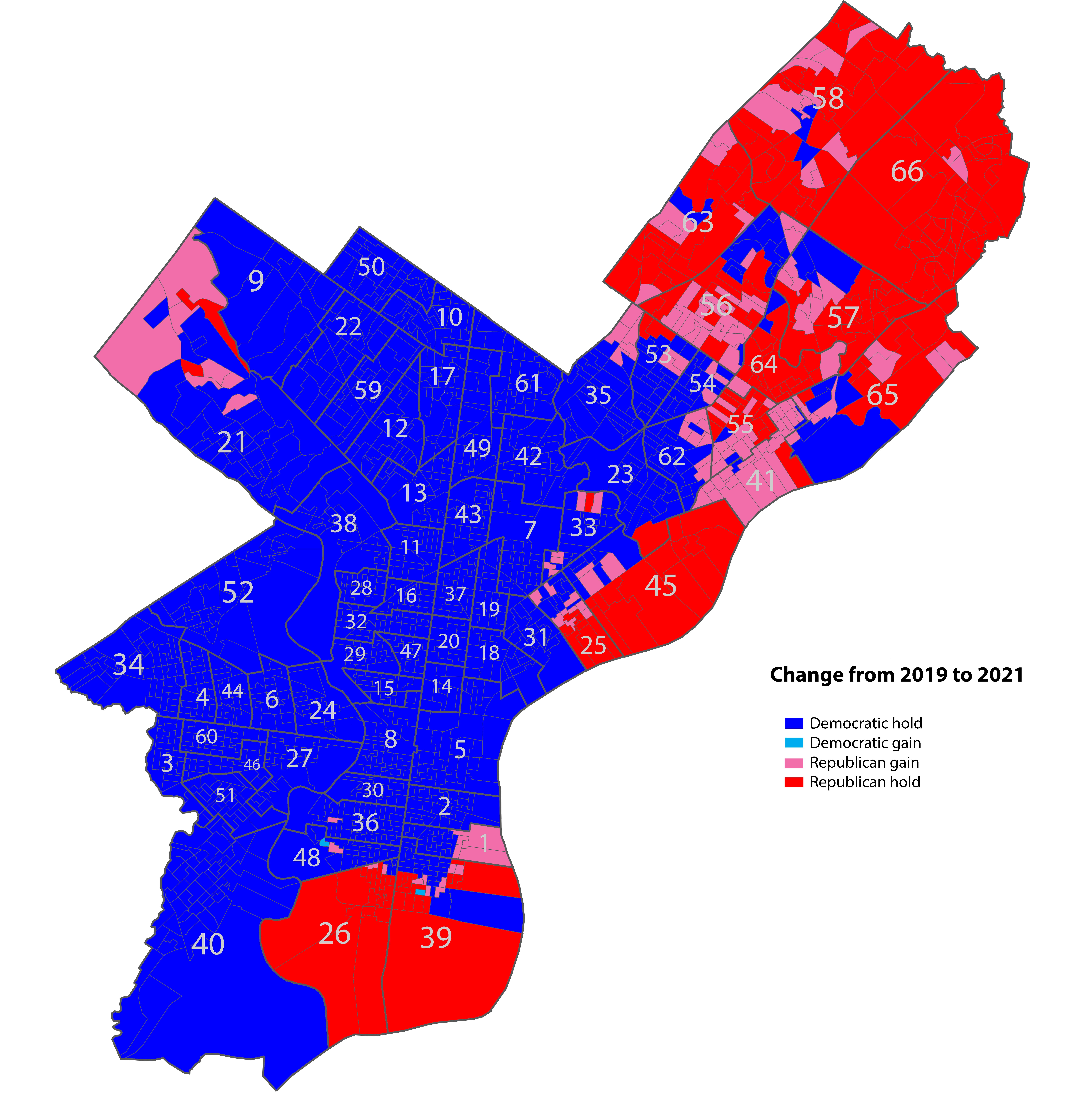 The Northeast has long been the most Republican region of the city, but Democratic mayors Michael Nutter and Jim Kenney carried every ward in the city – including those in the Northeast – in 2007, 2011, and 2015. Kenney lost seven of them in 2019, and Krasner’s performance in office helped add two more to the Republican column. It’s hard to see against the background of the rest of the city being overwhelmingly Democratic year in and year out, but this is substantial progress.

In South Philly, Peruto again expanded on Ciancaglini’s margins, adding the 39th ward to the 26th in the Republican column. No Republican can look at the 2021 election results and say, “we were this close,” but the math tells the tale: the Republican Party in Philadelphia is slowly, gradually improving. Can they get from 28% to 51%? That’s the million-dollar question.