You could write a book on The Geator with the Heator. The Boss with the Hot Sauce. The South Philly-born-and-raised-and-still-performing avatar of rock n’ roll, doo wop, and R&B as heard on the radio, viewed on television, and lionized for such by the Rock & Roll Hall of Fame.

That is if he didn’t do so himself with his best-selling 2011 autobiography, You Only Rock Once: My Life in Music. A memoir of the self and his place within rock ‘n roll and this city – a finer one you’ll never find.

Start there, and we’ll talk.

Google Blavat’s name and mine, and you’ll find a wealth of interviews, not just on his good work, but with the Geator espousing on everything from Gamble & Huff and Bell to fine dining and finer wine throughout Philadelphia, from the old days to the new days, and how one seamlessly affects the other. That’s how friends – practically family if you go back to his days on Bancroft Street, and my people’s days on Bancroft Street doors away from each other – talk.

“You know, A, Ronnie Spector did my show seven years ago,” Blavat said, suddenly quiet after recalling the Spanish Harlem-born singer Ronette the day after she passed.

“Jay Black from Jay & the Americans. Jimmy Beaumont. Lloyd Price. Johnny Maestro, Harvey Fuqua. So many artists that we had on the Kimmel stage are no longer with us. So much of it is disappearing, as is much of the audience,” he said. “The pandemic has really put a fine point on all of this. Who knows? It’s our job to keep it all going before we can’t.”

There are a million shows he could be talking about: the days of the Venue Club in the 60s or his still-running “Memories in Margate” now. He could be talking about debuting his radio show on the AM dial in 1960, “playing music from the heart, not a research chart,” as he wrote in his memoirs, or his current programs on WXPN, as well as other syndicated on-air and internet showcases on the dial and in the air via all things Geator Gold.

His show, the show we’re talking about today, is the one that Sidney Kimmel personally asked Jerry to do back in 2000 while getting ready to open the Kimmel Center in 2001, you know, before it was the Kimmel Cultural Campus. Kimmel asked Blavat to do an “oldies show” the likes of which had always been popular in the area, yet were usually low on the production scale.

The goal of a Jerry Blavat show at the Kimmel, always, is to bathe the singers and the audience in the glow of the moment they first crooned, swooned, danced, or sweated to the oldies, whether it was 1959 or 1963 or 1975.

“Sometimes we have to drop the key to suit their voices now, but the arrangements are authentic and true to their original charts,” Blavat said. “The musicians and singers appreciate and respect this as much as the audience.”

Jerry Blavat isn’t selling anything. He is curating the dreams and memories of yon teens, of parents and children reliving precious times accompanied by the music of their youth.

And this weekend at the Kimmel, after a 2021 where his show didn’t go live on-stage, he’s returning with the aptly titled “Jerry Blavat and Friends,” on Saturday, January 22. Not only because The Geator will welcome back Darlene Love, Little Anthony, The Tymes, Gary US Bonds, The Chi-Lites and The Vogues. For 2022, Blavat hosts his oldest friend, Philadelphia’s Frankie Avalon.

“Let me take this Jerry because I remember this like it was yesterday,” said Avalon from his home in warm Los Angeles. “We’re from the same neighborhood, and we both knew members of the Scotese family. I was friendly with Annette Scotese and Jerry, of course, was very interested in Patti, who later on he married. We met in front of the Scotese house.”

No sooner than Avalon finishes that phrase, Blavat chimes in with a date just as surely as he can recite B-sides of his favorite singles. “1958. You were going with ‘Blue Eyes.’ I was into Patti. There were a few other sisters. OK. So that’s how I MET Frankie. But I had been admiring him since he played trumpet, and Al Martino – another South Philly great – is the guy who introduced Frankie to Jackie Gleason and broke him big.”

Avalon recalled being 11 or 12 when Martino, an already-beloved crooner at the time, brought the trumpet prodigy to New York City to see Gleason, one of television’s early fire-starters with The Honeymooners in 1952, in the company of his show’s writers. No sooner than Avalon finished playing, Gleason turned to his staff and said, “Write a show. I want him on in two weeks.”

That was The Honeymooners’ “Christmas Party” sketch on The Jackie Gleason Show, a gig that led to Avalon getting a label deal with RCA Victor’s subsidiary “X” label with his first single, “Trumpet Sorrento,” released in 1954.

Around this same time, 1953, Blavat had already debuted as an on-air dancer on the original “Bandstand” out of Philly on WFIL with Bob Horn before happening on to a job as tour manager for Danny and the Juniors in 1956, then work as Don Rickles’ valet in 1958–1959.

“In 1956, when Bob Horn lost “Bandstand,” his manager Nat Siegel had owned a label, Teen Records, with a guy named Bernie Lowe,” Blavat said. “When Dick Clark took over “Bandstand,” Bernie moved the label into Cameo in 1956, which expanded into the Cameo-Parkway. They bought Nat out, who also happened to be a booking agent and a manager who also had the Celebrity Room.”

Along with managing Mike Pedicin and Danny and the Juniors (of which Blavat became the road manager), Siegel’s Center City nightclub often welcomed Don Rickles to his stage. “I was assigned to watch over Don, be his valet, because I knew everyone in town,” Blavat said.

“Frankie and I kept crossing paths,” he said. “If you grew up in South Philly as we did, you never lost that friendship. If I was in New York, working, I’d see Frankie walking down Broadway going to his next job. I marvel at Frankie’s God-given talent, but he was a kid like me – someone in awe of show business who became friends with our heroes Sinatra, Dean Martin, Sammy Davis, Don Rickles.”

Still fresh out of South Philly High School, Avalon performed on a slew of early television and radio shows as a trumpeter before getting a summer gig at Somers Point as part of the Rocco and the Saints ensemble. Once part of the Saints, he caught wind of a new South Philly-based label, Chancellor, run by Bob Marcucci and Pete D’Angelis looking for new talent. Looking for a vocal side to go with its instrumental “Jiving with the Saints,” Avalon sang “Cupid Shot an Arrow.” With its vocal turn a minor success, Chancellor sought to carry on with Avalon alone.

“So they bought me a $12 suit, brought me to Boston to be in a rock and roll show where nobody knew who I was, didn’t pay me a cent, but – after the show – I met all of these young girls backstage who wanted to know if I had a fan club,” recalls the singer. “That was it.”

Next thing you know for Avalon, starting in 1959, there’s chart-topping teen angel hit singles “Venus,” “Why,” “Bobby Sox to Stockings,” and “A Boy Without a Girl.” There’s dramatic Westerns such as Guns of the Timberland with Alan Ladd and The Alamo with John Wayne, both in 1960.

By 1960, Blavat was on-air at Camden’s WCAM, an instant hit who, once live, quickly found his show syndicated in Philly, Atlantic City, Trenton, Pottstown, Wilmington, and across the tri-state area. Forever more.

“I think that Jerry and I were fortunate then, and stayed fortunate through all these years,” Avalon said.

“Were we as teens prepared for fame?” Avalon responds quizzically to my question tied to years since of Britney Spears, Boyz II Men, N*SYNCs and such. “You’re never prepared for fame. In my opinion, you just did what you believed you could do and learned. You did what you loved because you believed in it. Not to become a star. If that happened, great. Fortunately for us, it did happen. It worked. I had a fan base of young fans for my music, so they figured I could bring those fans into the movies. I mean, I wasn’t an actor. Yet, I made over 40 movies. You just go – straight ahead.”

Blavat: “Everything parlays into something else. That’s show business. Literally.”

The other day, Avalon was watching TCM and he happened onto a film by Mario Lanza, a guy from 20th and Snyder. He changed the channel to MGM Classics and happened onto Voyage to the Bottom of the Sea, a film that he happened to star in. Had he stayed channel flipping, Avalon could have bumped into Bye Bye Birdie, a musical featuring his old pal Bobby Rydell with whom Frankie and Fabian – another Philly legend – will play with in Atlantic City this April.

No homecoming week could be finer than Blavat hosting Avalon in their stomping ground. 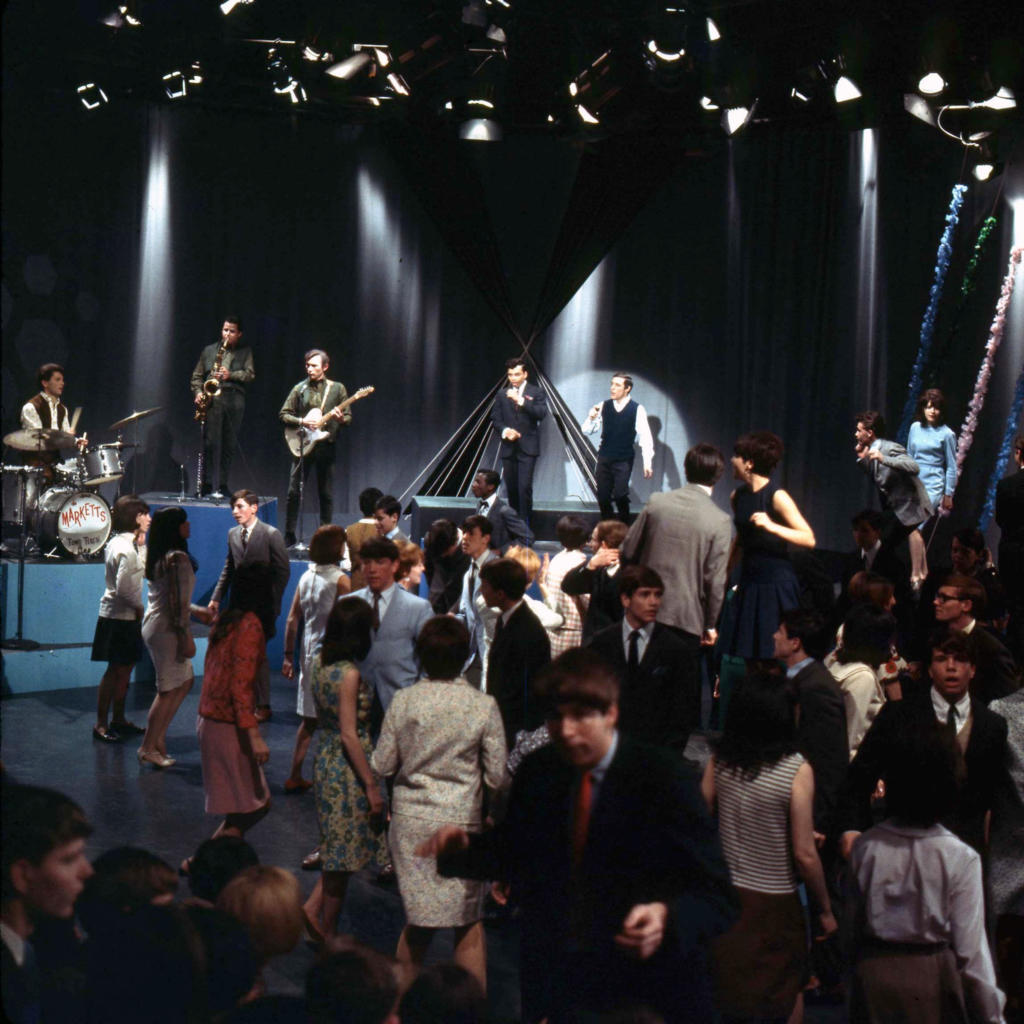 Contrary to popular belief, this is not exactly the first time that Avalon will be part of one of Blavat’s Kimmel Center extravaganzas.

“Frankie was a special guest of one of my Kimmel shows when he was down the street at the Academy of Music starring in Grease,” Blavat recalls of a time when Avalon, who played the ultimate Teen Angel in the 1978 film of the same name, was touring as part of the musical’s stage version. “Unannounced beforehand, Frankie just walked out on stage and the place went crazy. Now, this time, it’s going to be Frankie live and performing.”

What that means is that Blavat, orchestra conductor Hal Keshner, and director-arranger Mike McCourt will fuse the sounds that made Avalon great in the first place – all those strings and brass behind that silken teen dream of a voice singing “Venus” and other creamy 50s and 60s hits.

“I go back with McCourt to when I opened Memories in 1972, a drummer in the band there,” The Geator said. “He takes all of these acts’ exact records, listens, lowers the key and makes an arrangement for 40 pieces. I couldn’t do this without him. Hal’s been with me for 20 shows, and he’s marvelous.”

McCourt and Keshner create segues for Blavat to sing through – like the “House Party” opening number – as well as his surprise ad libs with the artist. “These artists are so good that if I want to sing with them, do something uncharted, they’ll do it. And the crowd eats this up,” he said. Combine that with a dozen-or-more Blavat suit changes (“all Armani and Versace. If we have six acts, I’ll do 12 changes”) and the magic of a Geator showcase comes alive.

“Back in the day of nightclub dates, you had maybe 8 to 10 pieces backing up the singer,” Blavat said. “I want to make it bigger for our singers, enhance the original charts. That’s what we have accomplished in the scope of 42 shows so far.”

Avalon is truly looking forward to the “Blavat & Friends” event, singing to his old friends in Philly and preparing what he calls a “knockout surprise” finale. “It will take you right back,” Avalon said. “I’m also looking forward to hanging out and getting something to eat with The Geator. He’s an icon.”

Up Next in Featured Sections