The Wombats have been British indie music darlings for more than a decade, and they’re back with a new album and a stateside tour. Their new album, Fix Yourself, Not the World was released January 7, and they’ll play at The Fillmore on January 22.

Fix Yourself was recorded remotely over the past year, with lead vocalist and guitarist Matthew “Murph” Murphy in Los Angeles, bassist Tord Øverland Knudsen in Oslo, and drummer Dan Haggis in London. The process was “pure madness, to be honest,” Murph said. Zoom meetings planned the day, then separate recordings were mixed into finished tracks by producers Jacknife Lee (U2, The Killers), Gabe Simon (Dua Lipa, Lana Del Rey), Paul Meaney (Twenty One Pilots, Nothing But Thieves) and Mark Crew (Bastille, Rag‘n’Bone Man).

Their fanbase has been buoyed recently by TikTok, when Oliver Nelson’s remix of their 2015 song “Greek Tragedy” took off. Thanks to 600,000 videos on the platform using it, The Wombats have surpassed a billion worldwide streams and gained another 2.4 million monthly listeners on Spotify since last January.

“I’m very proud that we’ve stuck in like some dirty little warthogs. It hasn’t been the easiest road but we’ve always kept our focus and it’s paying off,” Murph said. “I thought it was gonna stay in that mid-2000s indie rock phase forever and then swarms of younger people are now getting into the band and finding the older stuff.”

Fix Yourself also develops some new themes for the band, from the trials and tribulations of romantic commitment to the need to focus on self-improvement instead of raging about the world.

“It’s about cancel culture,” Murph says of pointed lines like “why don’t you chop my tongue out?” and “you don’t speak for me.” “The toxicity of social media. One of my friends said there’s no room for nuance in anyone’s opinions or views on the world, you’re either with us or you’re against us. I think people are sucked into a vortex of pretty bad ideologies…Where is the conversation, because it’s not gonna progress anywhere without being able to talk to one another intelligently.”

The point is not to control everything in life, but to appreciate the complexity of the world and try to understand it better.

PW caught up with Tord to talk about the band’s new album and return to touring.

Indie rock isn’t as popular as it once was, at least in popular culture. How do you keep your songs fresh?

I think the key is to not pay too much attention to genres or “caging” music into particular styles. I’ve always felt that music is much more free than that and especially these days bands and artists are much more genre fluid. We often take inspiration from multiple styles (whether it makes sense or not!) and that’s what I think keeps it fresh for us. The songwriting is the constant – I feel like that is something we’ve stayed true to and gives our music the familiarity within the different sonic expressions.

How autobiographical is the new album? “People Don’t Change, Time Does,” for example, seems notably raw and personal.

A lot of our songs are lyrically quite personal and are often taken from real-life events; so are a lot of the tracks on our new album. “People Don’t Change People, Time Does” however is completely fictional, although the lyrics still are very relatable!

How does it feel to tour again?

Touring is a really important part of being in The Wombats, so we are next level excited to be back in a room full of legends having a good time!

Any favorite cities to tour in when coming through America?

We enjoy playing everywhere to be honest, if the vibe in the room is good we are into it!

Is there a bigger gap today between British music and American music? Or have the distinctions declined, borders becoming less meaningful than when YouTube and social media were new?

I am definitely no expert analyst on this matter! But I’ve got a feeling that borders in general make less of a difference musically these days thanks to social media. But I think there will always be geographical differences to what is more popular as long as radio still is an important platform. 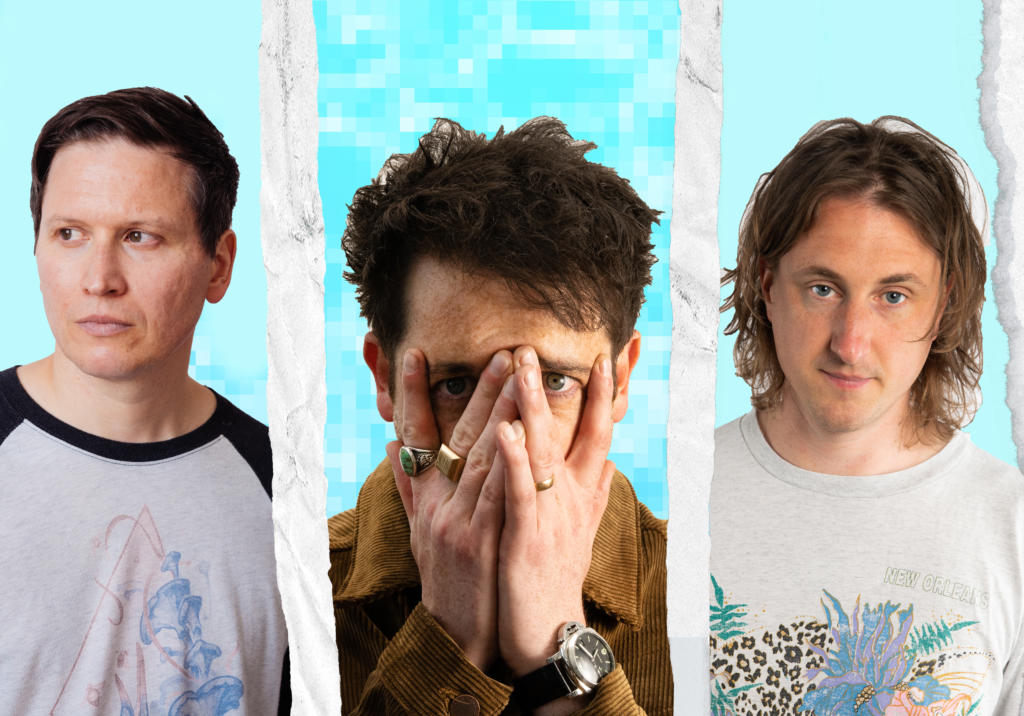 How did Liverpool and the Institute for Performing Arts influence you?

That’s where we met, so it’s thanks to that place we are even a band! It was a great place to experiment and figure out who we were musically and learnt a lot about recording and gave us the freedom and time to improve on the songwriting.

On this album the process was different to previous albums as we had to write and work on a lot of the songs over Zoom because of lockdown and the fact that we live in three different cities (Oslo, London, LA). Half of the album though was made before lockdown and for those songs we would start every session with a blank canvas and start writing and making every song from scratch. It’s really exciting working that way as you never know what you’ll end up with at the end of the day!

Are your influences generally coming from other music and artists, or does literature, paintings, and film do some heavy lifting here?

We get inspiration from anything really – all of the above can inspire a lyric or the concept of a song. Musically, it could be any artist or era or even sounds from specific songs, so we rarely have the exact same approach to any song.

What do you want listeners to take away from the new album?

Hopefully it will take people on an enjoyable journey through our take on the last year and a half.

Y’all have been performing and releasing records for more than a decade now, coming up on two. Does it feel any different, putting out the fifth album vs. the second or third? What’s changed?

You stack up a lot of experience after so many years together as a band, what works and what doesn’t work. I feel like we have gotten a lot more confident both in the writing and in the recording process / production throughout the years, so the process has become more enjoyable in my opinion.

What’s the best way for fans to follow y’all?

Up Next in Featured Sections