Perhaps NPR said it best – “Shemekia Copeland has established herself as one of the leading blues artists of our time.” On second thought, the Philadelphia Inquirer heralds Shemekia as “the antidote to artifice.” That’s true too, but take the time to sit and talk with Shemekia, away from the stage where her commanding presence lifts bluesy tales into sonnets against pain, heartbreak, and injustice. You’ll soon recognize how perfect Living Blues magazine was in their appreciation – “Shemekia Copeland provides a soundtrack for contemporary America…powerful, ferocious, clear-eyed and hopeful…She’s in such control of her voice that she can scream at injustices before she soothes with loving hope. It sends shivers up your spine.” That’s the word on Shemekia before her recent release Done Come Too Far (Alligator Records), a collection guaranteed to stimulate synapses, genuflect the spirit, and stir the pot of your soul. Or it may simply get you slapping your knees and having a downright good time with the Good Book and the catch of the day. 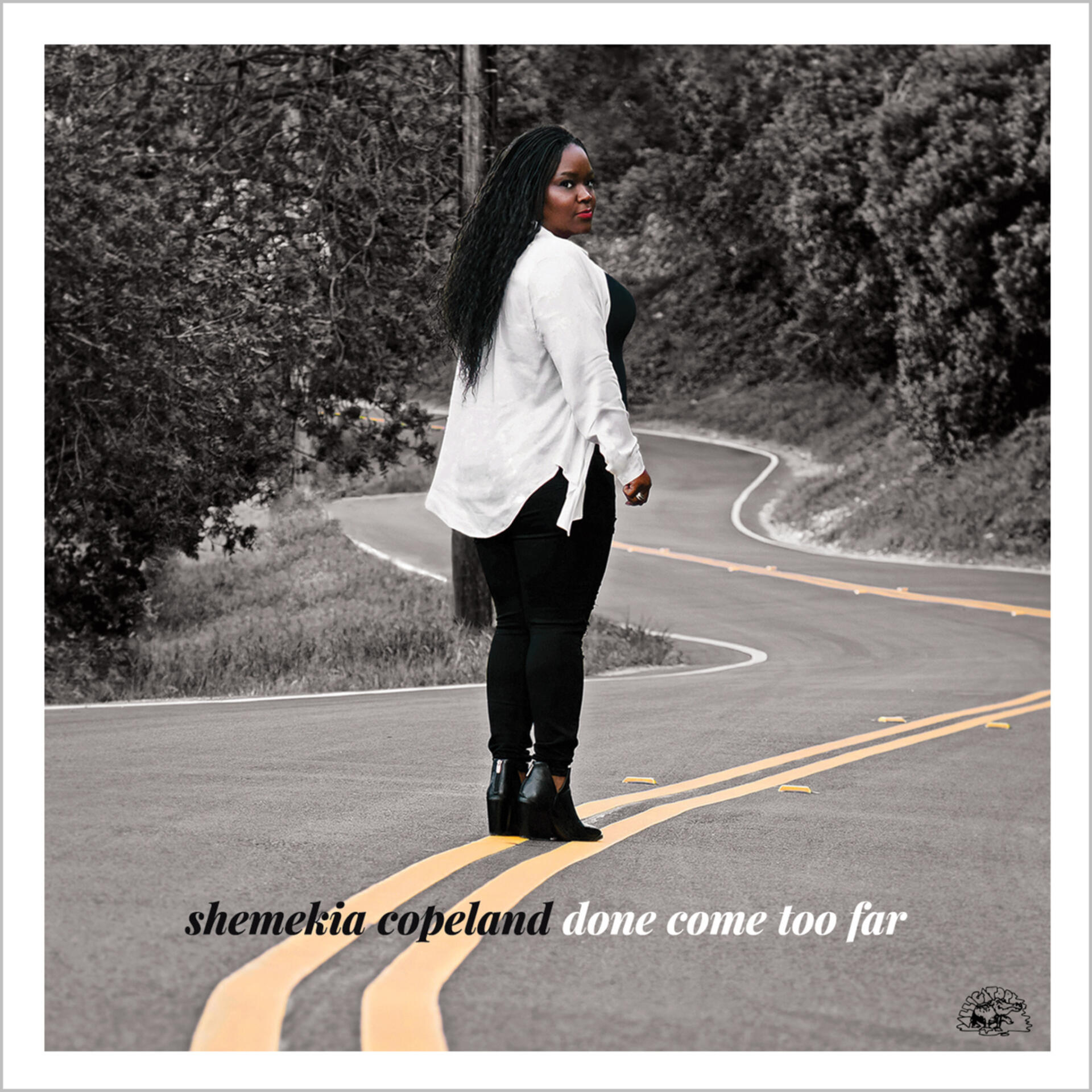 Because you’re going to be performing at City Winery, in your opinion, what would be the best wine to go with fried catfish and bibles?

(Laughs) I think that’s the beer crowd that likes their fried catfish and bibles. I don’t know if they’d be sipping on wine; probably more like some moonshine.

So would you be sipping on some moonshine?

Probably not because I know better. (Both laugh)

You got some moonshine stories that people don’t need to know about, don’t you?

What was the inspiration behind that track?

Y’know, I had never done a song with a Cajun feel to it. I just thought what that kind of party would be like and would I wanna go. And (laughs) that’s how we came up with that one. I do like some fried catfish, though. I can cook it and I like to eat it, but these days I’m having it more grilled.

I feel you because you can play around with the seasoning a bit more that way. And some folks fry the fish and chicken in the same grease, and everything starts tasting the same.

Is there a story behind the track ‘Why, Why, Why’?

Susan Werner wrote that, and it’s just a classic relationship song. A classic heartbreak song; I thought doing something like that would be cool.

I’m not sure where (Susan Werner) was coming from when she wrote the song but, for me, having been in a relationship, having had my heart broken, I kind of get it. ‘You know what? I don’t need the details. Just tell me why you did it.’ That’s it. I wanna know why. Why?

I guess I get it. That makes sense because it’s not so much the details; it’s the betrayal, right?

Does that blending of the personal with the craft of songwriting make blues music stand out from other genres?

Absolutely, I think that’s what it’s always been about when it comes to the blues – the stories. Your experience, per se. Blues is about stories, so, for me, I like to keep things extremely relevant by talking about what’s happening now. Making little pieces of art, so that if somebody found my album a hundred years from now, they would know what was happening in the world in 2022.

Thinking about what’s going on in the world right now, it’s kind of hard not to want to tell that story in a song. It almost begs to be told in the song because things are messed up right now.

It is messed up right now, and I’m not the kind who likes to sweep things under the rug. I’m the type of person who feels like we need to educate ourselves, deal with it, learn from it, and then move on. But I think this country is like, ‘let’s just sweep it under the rug.’ Try to forget it ever happened, and then that’s it. But that is not it because it keeps rearing its ugly head because we don’t deal with stuff, right? That’s the problem. We don’t deal with it.

Why do you think that is?

Well, because we’re led by the idiot box, the media, and stuff like that telling you how you should feel instead of using your own mind. Think about the little things they do, media-wise, to create division.  They use words like gun control, which immediately upsets people, when really they should say let’s get the guns out of the hands of psychos who shouldn’t have them.  Because really, that’s something we can all agree with, right? It doesn’t matter what position you take. You want to feel safe in your country, you want your children to feel safe in their schools, and you want to be able to go to church without being shot. I think we all feel that way.

Then they say defund the police when really, let’s give them more funding so that they can educate themselves so instead of gunning down somebody who’s autistic; they know what to look for now.

It’s not about defunding; it’s about more training.

I have a little boy. I don’t want him to learn his education so that he can feel bad about it. I want to learn it so that he knows what happened, knows better, knows about where he comes from, and grows to be an intelligent human being.

The funny thing about the whole critical race theory controversy is that you know somebody sat down with a bunch of those dodo heads in a conference room in one of their ivory towers and came up with some three-word description for a made-up evil conspiracy. “Let’s call it Critical Race Theory.”

Nonsense (laughs). It’s just nonsense. Let’s learn our history. None of us come from a pretty history, you know what I mean? None of us; I don’t care who you are. If you were American at one time, you were the scum of the Earth. You got sent to the Americas from London if you were a criminal. So if you’re English, your ancestors were likely criminals (both laugh). Ours were slaves.

All of us come from a dark history. None of us come from a great history, but, in order for us to move forward and move on, we have to know it. And not repeat it. We can’t keep doing the same stupid stuff we’ve been doing. We got to stop it.

Final question for you. If you were to have your very own personalized, utility belt like Batman, what would you have in your utility belt?

I would have something to change one’s heart. I try to do that every day of my life. You know, when you see somebody looking like they’re having a bad day, I might give them a compliment or something like that.

In all of these songs that I do, I’m hoping to change one person at a time, in a good way. Educate them in some way about me and get to know me better. Changing people’s hearts. I did a song called ‘Would You Take My Blood?’ and the best thing happened. So many people said, ‘thank you for that song because it really touched me in a way that made me know that we are all the same. There are no differences; we are all the same. Thank you for that.’ And so, I would change people’s hearts and minds if I had any powers. That’s what I would want to do, and that’s what I’m using my little superpower for right now, but I’m just doing it through music.

Up Next in Music