“If you’re one of those ‘I love Pink Floyd but I can’t stand Roger’s politics’ people,” you might do well to fuck off to the bar right now.”

For the last five years, Roger Waters – the one-time front-man to, and co-writer of Pink Floyd’s epic classic rock catalog – has been on a tear through the wrongs of American politics, to say nothing of the blame he’s put on Israel (and the continued war with Palestine) and the fingers he’s pointed at the English empire to which he was born for the Colonial crimes they’ve committed against the world at large.

Starting with 2017’s “Us + Them” tour, when Waters wasn’t lacerating then-President Donald Trump with floating inflatable pigs during his menacing take on “Pigs (Three Different Ones)” – complete with anti-Trump-images projected onto the floating oinkers while split video screens featured dumb Trump quotes and a pants-less Trump’s tiny penis – he was yelling out his central message, plain and clear, “FUCK TRUMP.”

Roger Waters had entered the political realm, loud and clear, and didn’t care who liked or didn’t like what he had to say – hence, my first paragraph’s quote from Waters splayed against the digital wall of his newest stage set before showtime.

Back in 2016, while promoting his then-upcoming live film dedicated to The Wall, I spoke to Waters in a face-to-face conversation about the on-coming train of Trump and how the rabble could be easily roused. 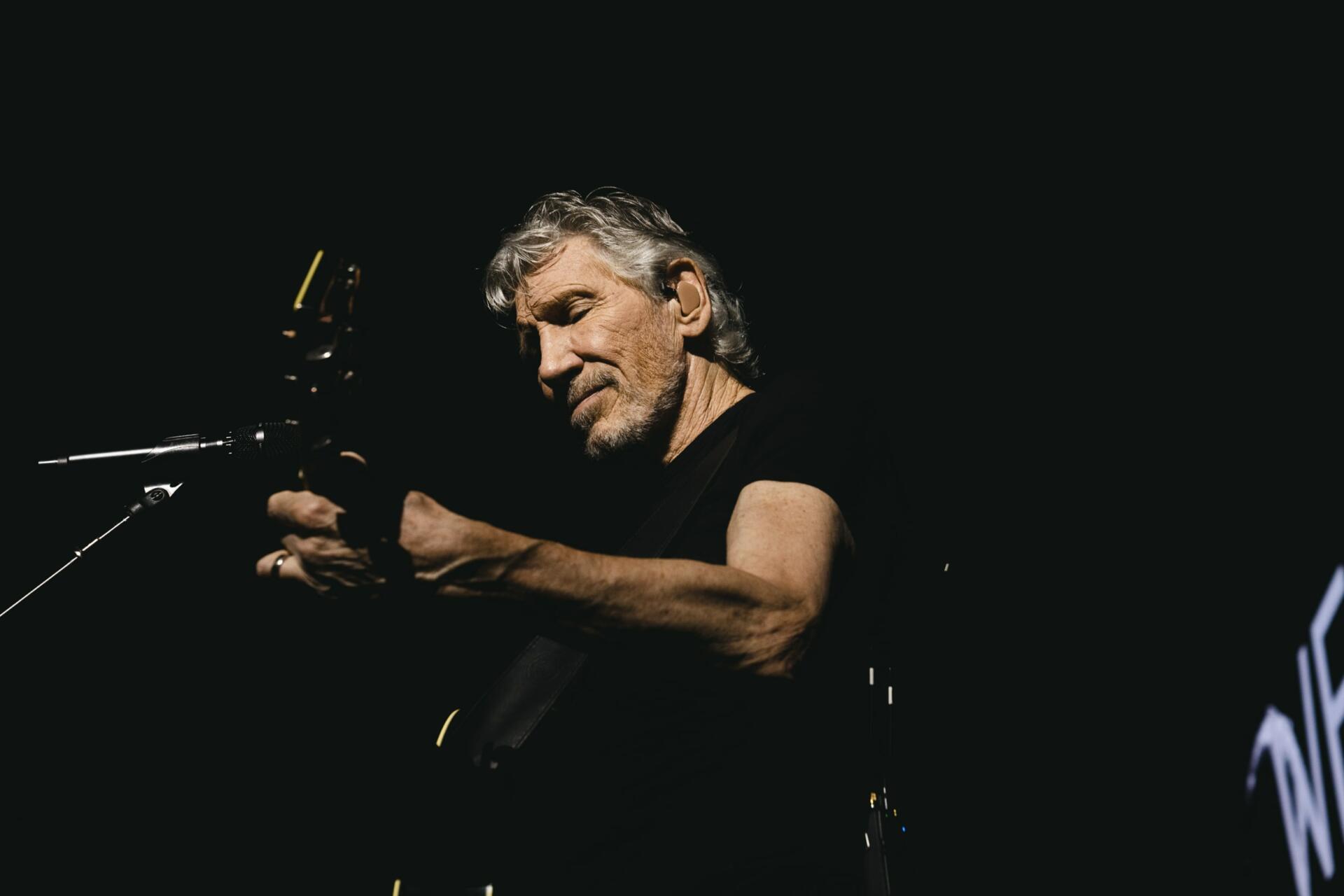 “We saw that in the Weimar Republic,” said Waters from high atop Columbia Records’ tower in Manhattan. “I hate to bring up the Germany of the ’30s, but there are models you can see that are deeply important for us to understand why things happened… It’s no surprise that people are pissed off, yet have no idea where to direct their actions. So, where do they? Communists. Terrorists, fucking Mexicans, whoever. It is very easy to convince people that somebody else is responsible for the trouble; that if you only corralled them, everything would be all right.”

Waters and I got to what the state of what a democracy could be and how the U.S. had failed dismally to make its mark for all of its citizens, equitably.

“Everybody knows this, but we all still lip service to the idea that it is. That’s kind of dopey. If you say anything against it, you are a pariah. You can’t criticize the state. I’m starting to get a bit of lashing, suddenly finding one or two doors closed to me here and there, especially in the media … It’s funny. The company is trying to insure that I talk about the product. Fuck you, say I. They say I shouldn’t bite the hand that feeds me. If I wasn’t busy biting hands, I wouldn’t have written most of the stuff that I did. Have they forgotten “Welcome to The Machine”?

Now, six years after our interview and five years after his “Us + Them” live showcase – with a pandemic, monkeypox, #MeToo, George Floyd, Black Lives Matter, anti-trans and LGBTQ sentiments abounding, besieged Indigenous people, and a Supreme Court legislating against the rights of women and their bodies following in the wake of his last tour – Roger Waters is, again, angered and armed for bear. 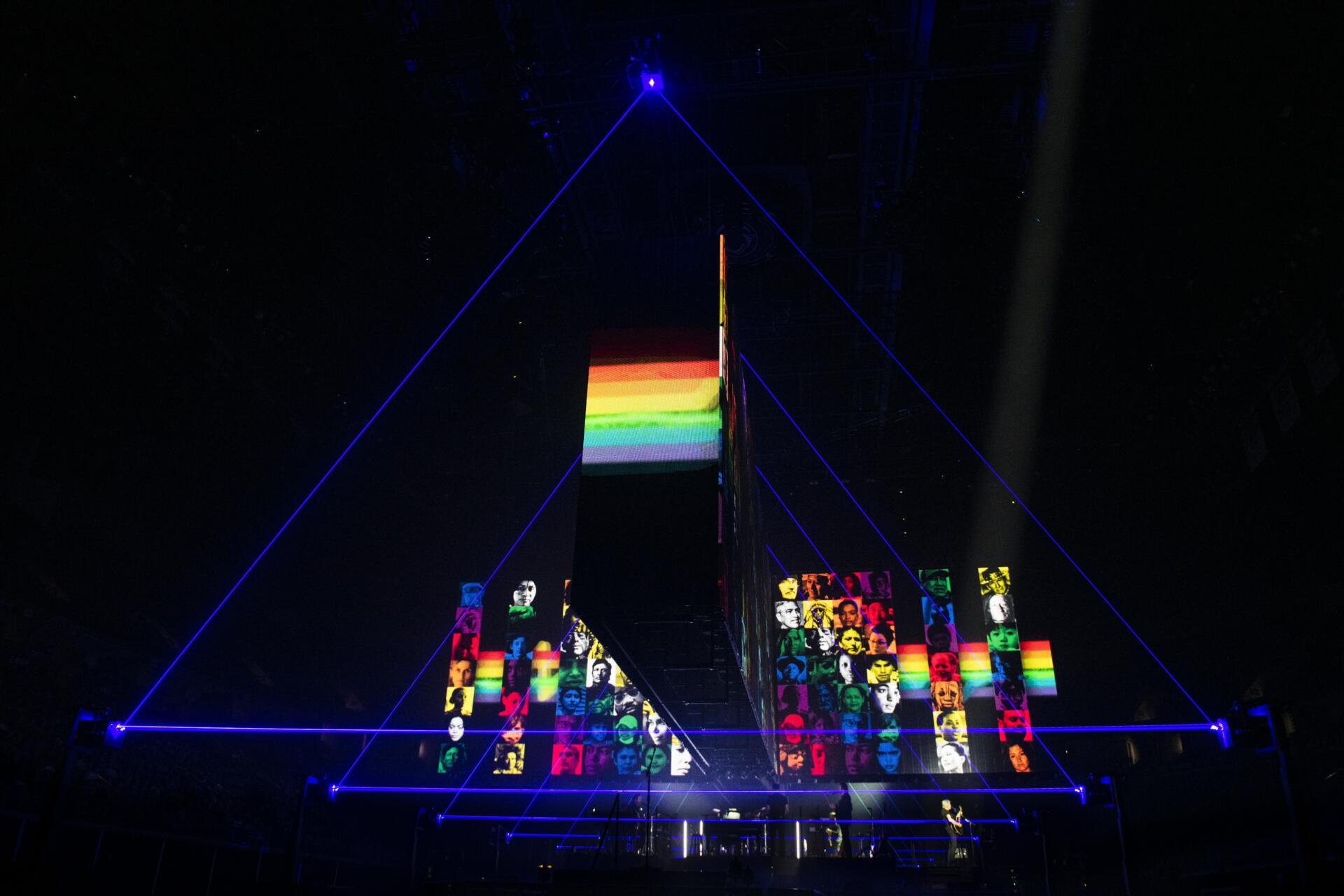 Looking to investigate the injustices that we wreak and the blind eyes that we turn, the vocalist, songwriter and multi-instrumentalist has launched “This is Not a Drill” – a multi-media, in-the-round tour that started in Chicago in July, touched down in Philadelphia on August 5 and 6, and moves forward to Columbus, OH, Long Island, NY, Washington DC and more before its Mexico City close in October 2022 (https://rogerwaters.com/tour/).

Here, during a two and a half hour+ set of surround sounds and dazzling, digital decay – a scorched earth world of imagery created by “Us + Them” Artistic Director Sean Evans across LED-based staging with help from secret footage found by Chelsea Manning and delivered to Julian Assange, along with other incendiary news-oriented video-makers – Waters shows that the ruin, relevancy (and failure) of politics is not a new thing for him.

Instead, by digging into his back pages (rarely played Pink Floyd songs such as the big business-raging “Have a Cigar” and the master and servant cataclysm of “Sheep”) as well as poring over newer, self-penned solo songs such as the piano-heavy “The Bar” and its plea for community, free press and human rights, Waters is connecting the dots of his social conscious past to that of his present. Maybe not so much of a future, though – as Waters introduced the intimately apocalyptic “Two Suns in the Sunset” from Pink Floyd’s The Final Cut album (a record written in response to British PM Margaret Thatcher’s jingoistic invasion of the Falklands) , he talked about the Doomsday Clock created in the 1950s by nuclear experts and scientists dedicated to pinpointing man’s last moments on the planet. Currently, the clock holds fast at 19 seconds to nuclear midnight. 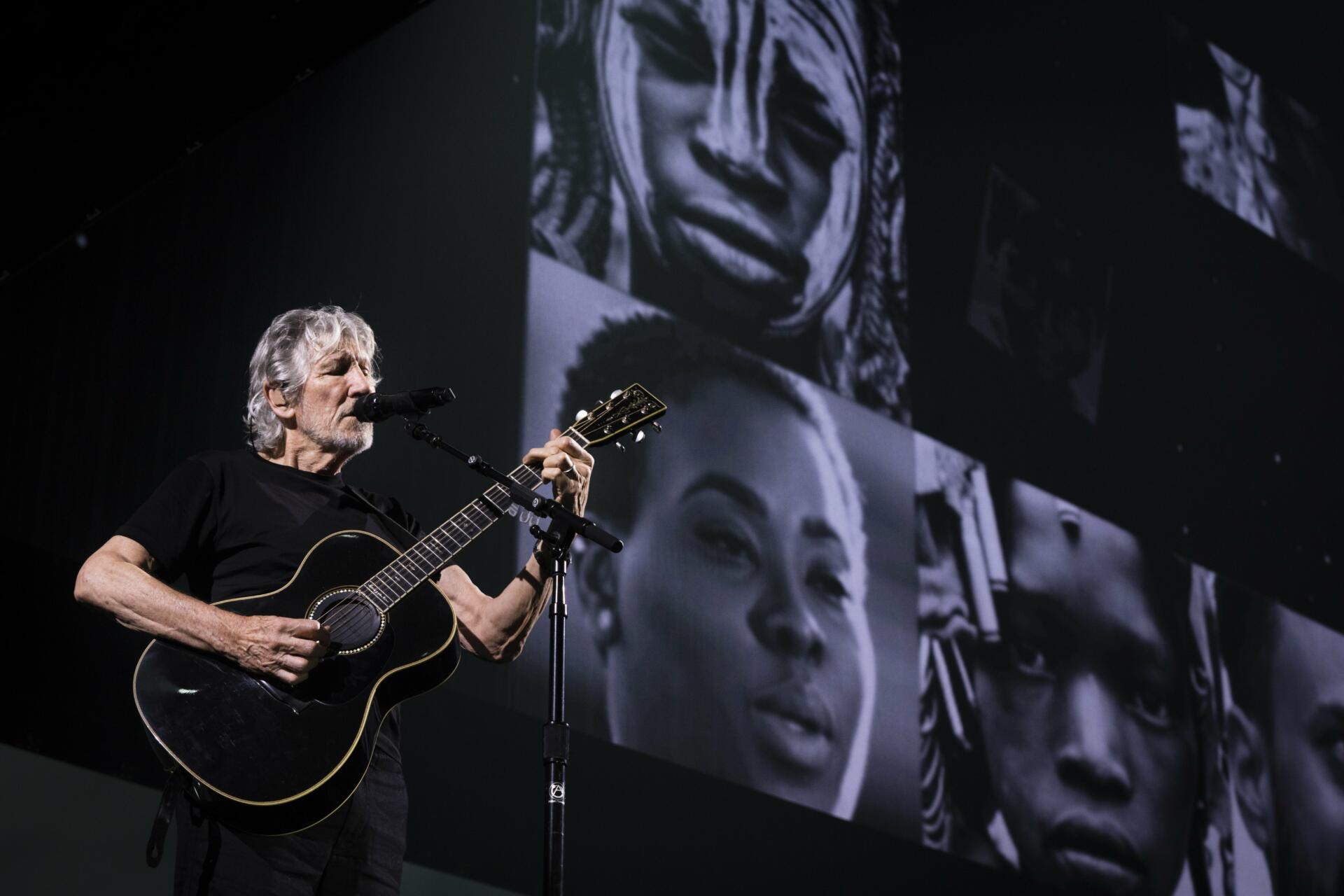 Welcome to the machine.

Starting with a creepingly narcoleptic “Comfortably Numb,” and its ultimate avoidance of all that hold meaning in the face of blank self-satisfaction, Waters and his large-scale ensemble moved through the authoritarian “Another Brick in the Wall, Parts 2 and 3” with mega-imagery of American Presidents from Reagan to Biden and the crimes they’ve committed toward humanity splayed across the images. If nothing else, the Waters of 2022 has allowed the blame for real evils rendered to be shared across party lines, far beyond Trump.

By the time we get to Waters’ solo social critique, “The Powers That Be,” from his Radio K.A.O.S. album, his scuffed and raspy talk-singing voice and its skronky instrumentation is backed by images of so-called crimes committed globally by People of Color such as Breonna Taylor and George Floyd and the inordinate and unnecessary punishment of death perpetrated for their perceived wrongs.

Age is but a number (ask Jagger, ask Iggy Pop, ask Dylan) and that Waters, at 78, still holds ragged fury and dramatically expressive emotion – and joy and hope when needed – as a calling card as a performer is what gives his political torpor heft, as well as his more deeply personal moments the intimacy that love and respect require. That emotion, mournfully ruminative but ultimately warm,  is held in dedication to Syd Barrett, the boyhood high school friend of Waters with whom he co-created Pink Floyd and whose wild, avant-garde and psychedelic vision and manic guitar playing fueled the ensemble’s initial albums The Piper at the Gates of Dawn (1967) and A Saucerful of Secrets (1968). 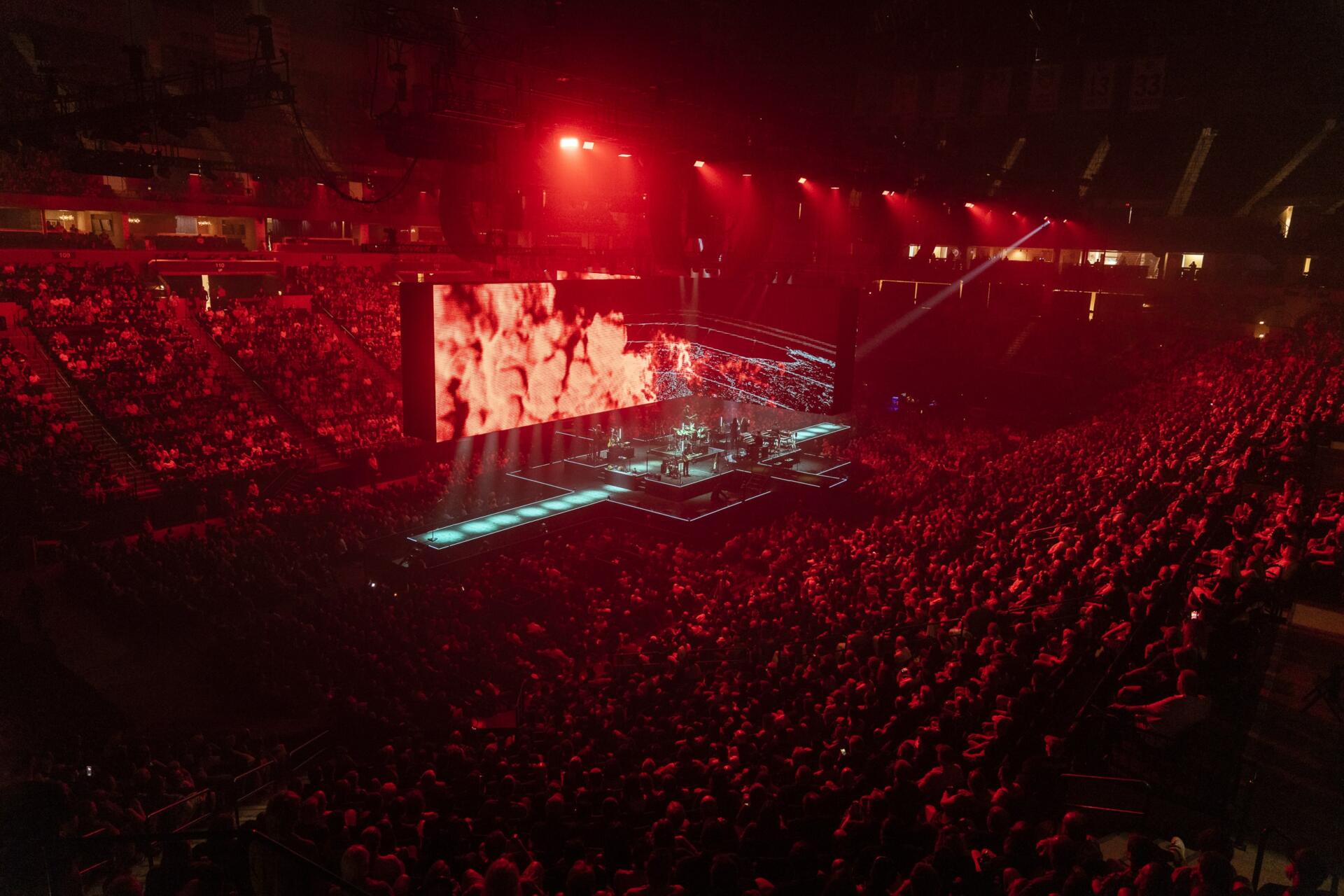 To that end, through a blend of electric bombast and nuanced acoustic guitar work, “Wish You Were Here” and “Shine On You Crazy Diamond (Parts VI-IX),” Waters lands on the brotherhood of youth and what was shared with Barrett – until it wasn’t. For after the second Pink Floyd album, Barrett lost his grip on reality and sailed into a psychic oblivion from which he never returned.

This relationship is what gave Waters the title of his newest tour – to guard life and love to its fullest, for this time on earth that we share – that he and Barrett shared, is not a drill.

Once back from an intermission, Waters – decked out in gestapo black leather, dark shades and a machine gun – played into the militarism of The Wall and two of its most brutal songs, “In the Flesh” and a soaring “Run Like Hell” followed by his 40-foot wall’s sloganeering of “Fuck the Supreme Court” and “Fuck the Patriarchy” on display. 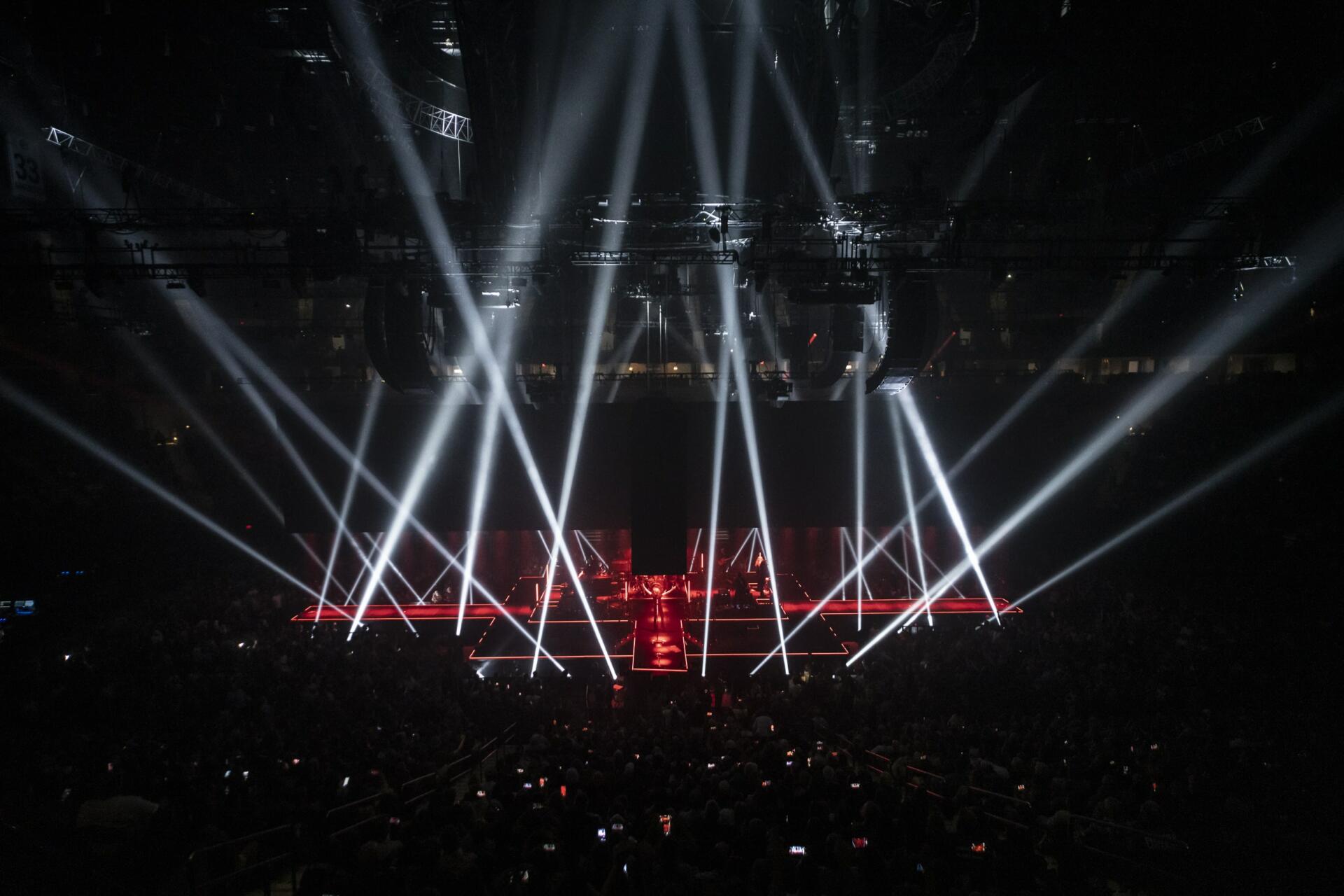 When Waters hits the somewhat heavy-handed “Is This the Life We Really Want?,” his plea for equity is in full-flourish, dedicated as it was to “All of us, the blacks and whites, Chicanos, Asians, every type of ethnic group, Even folks from Guadeloupe, the old, the young, Toothless hags, super models, actors, fags, bleeding hearts, Football stars, men in bars, washerwomen, tailors, tarts, Grandmas, grandpas, uncles, aunts, Friends, relations, homeless tramps, Clerics, truckers, cleaning ladies.”

But not ants. Why?

“The ants don’t have enough IQ to differentiate between, The pain that other people feel, And well, for instance, cutting leaves, Or crawling across windowsills in search of open treacle tins, So, like the ants, are we just dumb? Is that why we don’t feel or see?”

And though the evening’s true finale was an accordion-led closer “Outside the Wall,” it was the funky politics of cold hard cash (“Money”) and the algebra of need, fear and neurosis – the eerie, uplifting epiphany of “Us and Them,” “Any Colour You Like,” “Brain Damage” and “Eclipse,” all from Dark Side of the Moon, that brought Water’s set to a finessed and epically grand finale.

So what did we learn from all this in the end? That all presidents are bad and that the end is near. But in Roger Waters, that mad decay can have a glimmer of hope to go with the possibilities of equity and humanity.  Shine on, you crazy diamond.

Up Next in Music