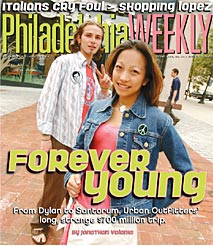 There is, perhaps, no more efficient way to remind yourself that you are no longer 22 than to walk the aisles of Urban Outfitters. For the postcollegiate slackerati it is a mecca of precisely modulated urban hipster cool, a time-warp thrift store aesthetic filtered through a retrograde prism of detached irony and kitsch–proof positive of the fashion adage that everything, no matter how uncool, comes back into style eventually.

This is readily apparent to anyone old enough to remember when most of these styles were cool for the first time. Rule of thumb: It takes only 20 years to rehabilitate even the most heinous fashion travesty back into must-have chic.

As of last week, Urban Outfitters was rocking a late ’70s, early ’80s zeitgeist–somewhere between the feathered hair Camaro summer of That ’70s Show and the New Wave striped shirt Martha Quinn-ness of early MTV.

There are the straight-out-of-the-time-capsule T-shirts emblazoned with slogans like “Jive Turkey,” “Death Before Disco” and “Atari.” There are the old-school Pumas, Adidas and Tigers in a dozen shades of retro. There are kitschy toys like Mr. Potatohead and Bubble Monkey, Run-D.M.C. action figures and the DeLorean time machine car from Back to the Future–some assembly required.

For the girls, there are Dr. Scholl’s slides, MIA since the Carter administration. There are bright-colored tank tops with white trash nudge-and-wink slogans like “JUGTOWN PENNSYLVANIA” and “FRENCH LICK INDIANA.” There are floppy ’70s-style halter tops, ’80s cropped parachute pants and Muppets panties emblazoned with the visages of Kermit and Miss Piggy. 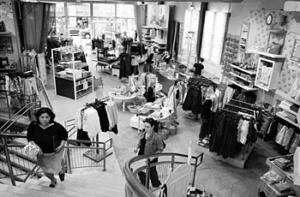 The interior of the flagship store at 17th and Walnut streets is stylized to evoke what can only be described as janitorial chic: exposed brick scraped plaster walls and low-hanging ventilation ducts. Everything is illuminated by the soft glow of warehouse loft light fixtures. All the merchandise is displayed against pegboard backdrops faintly reminiscent of ye olde family rec room or dad’s workshop. And piped in over the sound system is the jarring electro clatter of Peanut Butter Wolf’s oh-so-appropriately titled album Badmeaningood.

YET DESPITE ITS SLACKER AURA and carefully calibrated antiestablishmentarian cachet, Urban Outfitters Inc. is in fact a very Establishment, hypercapitalist multinational retail concern with 51 stores in North America and flagship locations in London, Dublin and Glasgow.

Urban Outfitters also owns and operates 40 Anthropologie stores (the 41st store opens this Friday), which peddle a variety of upscale apparel and housewares to women aged 30 to 45. The company also markets a wholesale line of housewares and apparel called Free People to approximately 1,100 retail clients.

In fiscal year 2003, a year when most retailers’ bottom lines crapped out, Urban Outfitters opened 13 new stores and posted a company record of $423 million in sales–with net profits jumping up a whopping 83 percent over the previous year to $27.4 million.

But the difference between stage-crafted storefront image and corporate reality doesn’t end there. It extends all the way to the top, to the man who built the company from scratch–Richard Hayne, Urban Outfitters’ president and founder.

While the typical Urban Outfitters shopper is likely to be liberal-minded–as is the province and privilege of youth–the fiftysomething Hayne is mom-and-apple-pie conservative. He and his wife Margaret have contributed $13,150 to the campaign coffers of Paleolithic right-wing Republican Sen. Rick Santorum and his Political Action Committee over the years.

Hayne, who would prefer this fact not appear in this story, did not always tilt hard to the right. In fact, he and the retail concern he founded came of age in the heady, longhaired lefty crucible of the ’60s. Back then he was vehemently opposed to the Vietnam War, the Nixon administration that perpetrated it and the big business military-industrial complex that financed it.

The times, however, have a-changed.

“Hi, this is Judy in the woods,” says the voice on the answering machine at the Poconos summer home of Judy Wicks, owner and operator of the White Dog Cafe, a homey restaurant/bar in University City, and of the adjoining artsy gift shop called the Black Cat. Wicks is a prominent local businesswoman and a diehard liberal activist. She’s also the co-founder of Urban Outfitters and the former wife of Richard Hayne.

Judy met Dick back in the fifth grade in Ingomar, Pa., a sleepy hamlet just north of Pittsburgh. Judy was taken by Dick’s prowess on the softball diamond, and the two soon became grade school sweethearts. But by the seventh grade their puppy love romance, such as it was, had petered out.

The years passed, and eventually Judy left for Lake Erie College in Ohio, while Dick enrolled at Lehigh University in Bethlehem, Pa., where he studied anthropology.