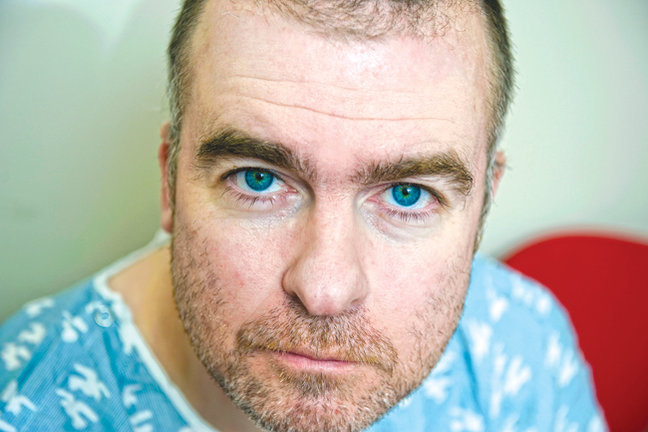 An hour ago my cat Sylvie was yowling in discomfort and confusion, but now she looks positively regal. She crosses her paws—one shaved to accommodate the IV through which the vet will inject a lethal overdose of anesthetic—and stares serenely into the middle distance.

Meanwhile, I’m a blubbering wreck. I’m sobbing my way through an entire box of tissues. I totally lose it. “What’s your date of birth?” asks a nurse who’s filling out forms.

I freeze. What do they want to know that for? Has my wife—cursed with a cancered cat and a cancered husband—secretly arranged a two-for-one deal?

This is a story about dignity. I used to think I knew exactly how I’d respond in moments like these. I’d be like Cary Grant in His Girl Friday: Pithy, sophisticated, dryly witty and unflappably handsome. But, in fact, every time I’ve faced real-life drama I’ve been more like Ben Stiller at the end of There’s Something About Mary: running down the road screaming, flapping my arms, blubbing like a baby. Which is what I’m doing now.

Regal Sylvie is disgusted—even as the drugs take her down, she refuses to make eye contact. I think, “When I go, I’m going out like Sylvie.” But the truth is you don’t get to decide. Death isn’t like that. Most of us die lying in our own shit and crying for our mommies.

“Anyhoo, it’s malignant,” says the doctor to the cancer patient in the cartoon on the wall of the cancer doctor’s office. The horribly informal word strips away the patient’s last shred of dignity.

Ordinarily that’s funny, unless you’ve just been told—for the second time in less than three years—that you have cancer. Then it’s fucking hilarious.

This particular cancer doctor has festooned his walls with framed magazine covers that roar AMERICA’S TOP 100 DOCTORS. In England such a display would be considered frightfully immodest. In Philly it’d be considered a tad gauche. But in look-at-me-everybody New York it kinda looks cool. Dignity is a moveable feast.

Three years ago I was diagnosed with Hodgkins lymphoma. I did chemo and suffered an allergic reaction that nearly killed me. I wrote a story for PW about it. Shortly afterward a neighbor in my Mount Airy apartment block accosted me in the laundry room.

“I was really amazed you could write a story like that,” she said. “I mean, you English—you’re so aloof … ”

I went into remission—and then spent ages with various straight-outta-Alien super-long-necked, hi-tech mini- plumbing-robots probing my drugged-to-fuck innards trying to find the cause of an entirely new set of nasty symptoms (including, but not limited to, puking, shitting through a needle and stomach pain).

In June 2008 I was diagnosed with celiac disease—a wheat allergy gig. I cut flour and cake and croissants and (sob) the crusty baguettes from La Colombe on Manayunk High Street from my diet and spent hours interrogating waiters and shop staff about their food preparation procedures.

I became one of those insufferable, sniffy, subhuman asswipes who pisses everybody off by asking the deli counter guy to please change his gloves. I’m now a member of that species of prissy, nit- picking, ingredients-reading, self-obsessed bastards who always got on my nerves. I’m a cousin to the loathsome vegan, the tedious vegetarian and the religious nut job.

On this new diet the vomiting and the shitting through the needle ceased, but the stomach pain just grew. More sexy, sinuous, stainless steel snakebots were sent slithering down my throat and up my anus; snipping chunks out of my slimy guts.

Then on Thurs., Jan. 29, 2009, I got a phone call from my gastroenterologist. He told me I’ve got a cancer called enteropathy-associated T-cell lymphoma— which only afflicts a small percentage of the small percentage of people who develop celiac disease. And as cancers go, it’s a bastard.

Anyhoo. I put the phone down and let out a huge, self-pitying “Why me?” The answer, of course, is the same as the answer to Travis’ shit-awful 1999 international breakthrough hit, “Why Does It Always Rain on Me?” Because you’re a fucking dick. Now shut the fuck up and grow a pair.