Ian Morrison, aka Brittany Lynn, is a household name in Philadelphia for many reasons. He’s been getting into drag for over 30 years – starting by entertaining crowds in nightclubs and bars (along with the Rocky Horror Picture Show). He’s gotten a day dedicated to him for his fundraising efforts from City Council, along with bringing drag into the Mummer’s Parade and hosting the LGBTQ+ float in the city’s annual July 4th Parade.

In addition to his regular gigs with his Drag Mafia (including Drag Brunch, Bingo and a cabaret show at Resorts Casino), he’s more recently in the past few years begun doing Drag Queen Story Time at various locations within the Philadelphia Library System.  He’s also starred in a short film about his experience with Story Time.

We got the chance to catch up with Morrison to talk more about how drag can be family friendly.

PW/Karl Michelfelder: You are known for your variety of programming and much of it works for a pretty broad audience. Who is welcome at your shows?

Ian Morrison: Everybody is. Drag is expressive and it’s art and it’s really just showing the whole gender spectrum in a creative way. Back in the day when I started, it was just “dressed as a girl”, which is where the word drag came from. Now it’s become so much more than that. And it’s been adapted to cover any person with any gender identity who wants to participate in the craft.

PW: Tell me, what enriches you about the fact that people are able to bring their kids or their grandma and everyone else to your show? How does that make you feel?

IM: So I guess the best way I could put it is, like, when I first started doing drag, luckily I had a very understanding family. So when I was 18, I was touring with Rocky Horror, the live musical, and my mom brought my grandmother to the TLA on South Street on Halloween, filled with hundreds of people watching me at 18 years old in lingerie and underwear playing the part of Frank-N-Furter. And it was a moment that I never thought I could experience to have my mom and my grandmother there watching me do this. Fast forward a year later I was playing Alice in The Brady Bunch show and got my mom, my grandmother, my dad, the whole family to come see the show. And it made me feel like I could be who I want to be without judgment from family.

I don’t care what other people think. I really also don’t care what my family thinks. It was just amazing to feel accepted and I feel if I can, I’d like to be an example for other people who just want to live authentically. Especially at a young age, then I’m changing lives with my art. And also the main reason I do Drag Queen Story Time for younger kids is to give everybody the idea that you can do what you want in life as long as it doesn’t hurt others and showcase your craft and what you’re good at and just spread joy doing that. 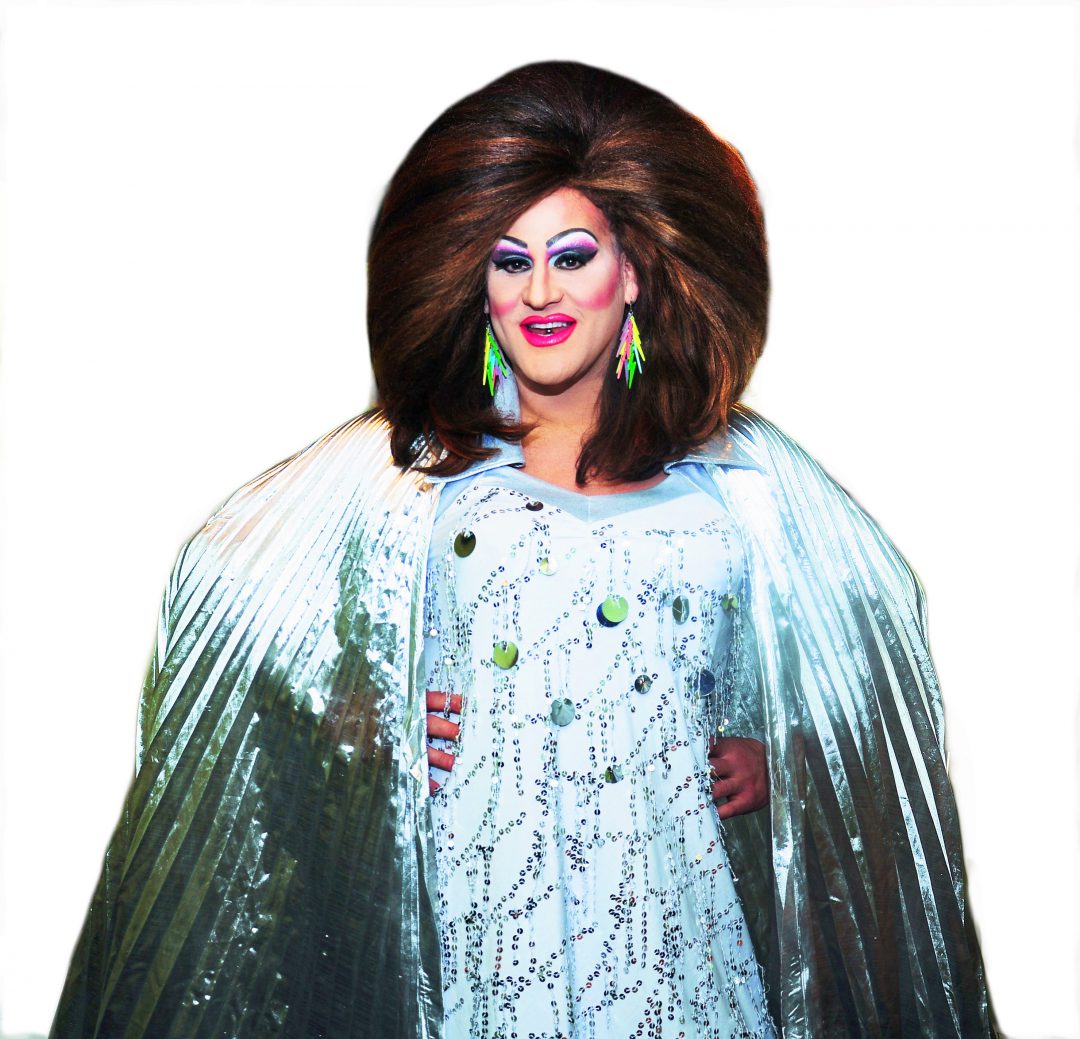 PW: You recently returned to your high school to produce a drag show. How was that experience?

IM: It was really an amazing moment for me because when I went to Northeast High School in the eighties and graduated in 1990, there wasn’t anything that was LGBT in the media, so there wasn’t anybody for me to look up to or turn to. And this was before the Internet. So I really thought there weren’t really any other gay people that I was like weird or different for being who I was. And I couldn’t share these thoughts with anybody at that time.

So when I first went back maybe three years ago to host a talent show in drag with Tony Danza, it turns out that the basement of the school where a lot of the workshops where I work became a GSA (gay-straight alliance) space. So that was really a tearful moment. I remember getting really worked up on my Facebook Live that now these kids could experience what I didn’t get to experience at that school in the 80s. So to come back and then be asked to put on a drag show on the very stage they used to do the school shows on, it was beyond amazing. And I felt like I came full circle and I could express my true self in, of all places, Morrison Hall in the place I went to high school.

PW: Well, growing up at least close to the Northeast in the 80s, I know that it was not friendly to gay people. And I don’t think it knew to be. I don’t think people knew whether to be friendly or not.

IM: I remember, Sunshine Blues in that little strip mall started carrying pink clothes from Bugle Boy for guys. And I wore this pink popped collared shirt to my first period class, and we were doing Grease at the time, so I had my hair in a ponytail, and my sister had pierced my ear. I got called to the principal’s office because it created such a stir that there was a guy with a ponytail, an earring and a pink shirt

PW: So tell me a little about your children’s books.

IM: The first one is The Adventures of Miss Kitty Popcorn & Cheese. And it came out in 2019. I wrote it in 2018 and it’s about a girl going to witch school and she doesn’t fit in because she likes to play sports and she likes to dress like a boy. It also just happens to be that her girlfriend is a person of color. So these were all topics that weren’t that pre-2020. Right before the Black Lives Matter movement. And these were all themes that I wanted to put out there with a children’s book, because at the time, there weren’t too many children’s books that let kids be themselves, you know, play with gender roles and discussed interracial relationships.

PW: And you have another on the way.

IM: It’s part two. So in the first one, Miss Kitty Popcorn was based upon my cat, Kiley, who passed at 21 years old last year. And she loved to eat popcorn. So I used to call her Miss Kitty Popcorn. And she is the main character, and her friend is a mouse named Cheese. And so they kind of developed powers on their own through an accident that happens at the witch school. The second one is a continuation. It’s the next semester at the school and there are new villains introduced and the main villain has a dog that is based upon my dog, Buddy. So now you have the cat, a mouse, and a dog. And it’s a whole new adventure. It comes out in October for a National Coming Out Month and Halloween. I really take pride in those books and what it puts out there.

IM: At the time it seemed very extreme to film the movie Parrot. We filmed during the pandemic at the Fumo Library in Philadelphia.  I asked for the film to be filmed there because it was the first place that I did a Drag Queen Story Time for the Philadelphia Library System. So at the time, it seemed a little extreme because this was 2021. We were still in the pandemic and it seemed a little strange that there would be protesters and, you know, such a scene outside. But now, to have experienced that with protesters showing up at the Cherry Hill Library and with me having to be walked in through the back door because there were so many protesters outside, it sort of came full circle. And the fact that the protesters came around the back door when I was trying to leave. It was unnerving. I will say that the protesters in the movie Parrot did such a great job that people of the community called the police. And the police showed up during filming because they thought people were actively protesting. And my cousin and my niece were there playing protesters.

PW: When does Parrot come out?

IM: It’s playing this whole year in film festivals. We won “best of” in several of them. Right now it’s at the Long Island Film Festival, which is Oscar qualifying. You know, I don’t know how that works, like if it’s selected, but they just told me it’s Oscar qualifying, whatever that means, but it’s playing everywhere. Once it’s done at all of the film festivals, then we’re able to put it online on Amazon Prime and things like that.

PW: How do you think the presence of protesters affects the kids who come in?

IM: That’s a good point that these protesters should think about. Like it’s definitely more harmful to the children who just want to be there and hear stories. And it’s just showing them the hatred and people and the ignorance. The kids just want to come to story time and have a good time and learn literacy. Yeah, I mean, and enjoy a library space which isn’t too common.