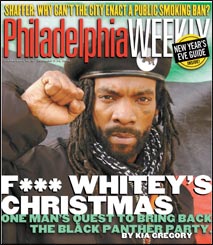 CAN THE BLACK PANTHER PARTY BECOME A FORCE AGAIN IN PHILADELPHIA?

King Samir Shabazz, 35, stands in his bedroom readying for war. He slides on his black military pants, puts on the matching cargo shirt and twists the shirt’s buttons top to bottom. He laces his shiny black leather boots and fastens his black artillery belt.

Now in full battle dress, he smoothes over the red, yellow and green patch on the front of his shirt that shows a black panther emerging out of Africa. Around the patch, it reads, “NEW BLACK PANTHER PARTY. FREEDOM OR DEATH.”

He angles the black beret atop his long dreadlocks. It is the final crowning.

Now he’s a soldier, not a thug; a leader, not a misguided stereotype.

Ready for combat and armed with 300 flyers, King heads for Suburban Station. His mission: to announce the arrival of a new black liberation army.

He positions himself against the flow of pedestrians and targets specific commuters by calling “black man, black man” or “sis.”

Some read the flyer immediately. Others fold it in half and tuck it away as King wishes them “peace” or “black power.”

When a grungy blond guy sticks his hand out for a flyer, King shakes his head no. When the guy asks for one politely, King looks him in the eye and spits out, “No.” The man walks away dumbfounded. King rolls his eyes, purses his lips and mumbles, “Cracker, please.”

A black transit cop is also refused a flyer.

A cop, even a black cop, is a pig and cannot be a part of the new liberation army.

Some people stop to ask more about this new army. One man recalls how the original Black Panthers watched over the streets of North Philadelphia in the ’60s.

Now there’s a new Black Panther Party? To protect us from what?

King Samir Shabazz opens the door to his South Philadelphia home clutching a chicken leg wrapped in a colorful napkin.

The house smells like fried chicken and burning incense. An African national flag hangs between the living and dining rooms. Above the couch, next to the television, hangs a poster of armed Panthers.

The chairman of the New Black Panther Party for Self Defense, King is dressed in full Panther regalia (thanks to I. Goldberg, which carries a full line of guerrilla-type threads) for tonight’s political education class.

The weekly meetings had been held at a West Philadelphia storefront. But King was told the owner’s husband didn’t want Panthers there. King, though, says he knows the bigger truth: When Whitey discovers you’re serious about revolution, he shuts you down.