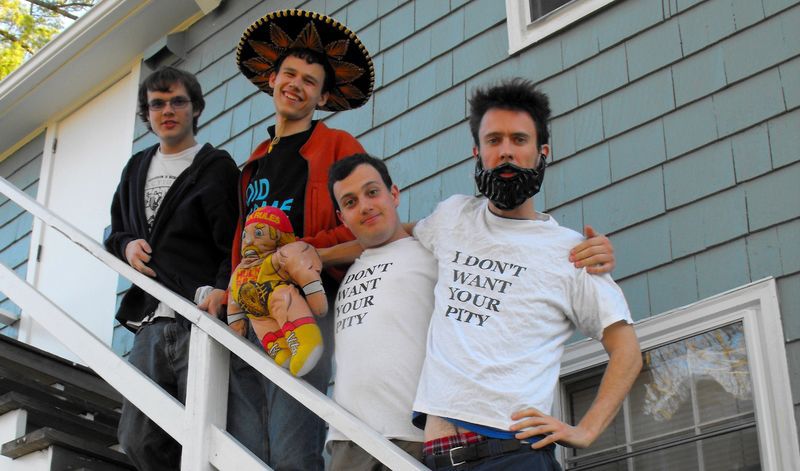 For the last two decades, rates of autism have been on the rise, with a Center for Disease Control study identifying 1 in 68 children as having Autism Spectrum Disorder. Awareness has steadily grown about autism and its high-functioning subcategory Aspergers syndrome, chiefly characterized by idiosyncratic difficulties in understanding social norms. Alternative comedy, a subset of stand up and sketch comedy similarly identifiable by strange deliveries, joke structures, and incomprehension of the logic of social norms has also gained popularity. Could there by a correlation?

For actors Noah Britton, Jack Hanke, Ethan Finland, and New Michael Ingemi, the members of Boston sketch group Asperger’s Are Us, there is. They met at a theater camp for autistic kids, and began writing sketches together based on a shared love of Kids in the Hall. They claim to be the first sketch group composed entirely of openly autistic people, something their name and web presence makes clear, although its possible I wouldnt have realized this from the act alone. I first saw them perform three years ago at the Silent Barn, a Brooklyn venue known for its DIY indie rock shows. They enthusiastically blazed through what seemed like dozens of sketches in about an hour. Some had ironic premises reminiscent of Mr. Show, like parents who put their adult son up for foster care. Others employed disarming physical comedy and visual puns, like their final sketch where Noah Britton raps a goodbye to the crowd while Jack Hanke wrestles with a stack of cardboard behind him. Noahs rap concludes, And give a hand for Jack, whose beatboxing is great! Another was just uniquely bizarre. A woman tells her partner shes pregnant. He responds that he has something to reveal as well. Im a wad of bubble wrap.

So our child will be a rapper? The wife asks.

…Or a bubble. He answers.

Weird as the performances were, they were in line with the type of sketch I like from Kids in the Hall or Whitest Kids UKnowoddball characters, goofy premises, and clever wordplay. As a neurotypical person who is generally ignorant of autism, I didn’t know what to make of the Aspergers aspect of the act. As a discriminating fan of alternative comedy, I ate it up.

Id say were not a part of the alternative comedy genre any more than Airplane! or Police Squad, Noah Britton says in an email interview with the group. In the early 80s, they wouldnt have been considered alternative comedy, like Steve Martin probably was. They were just nerdy and unique. Im hoping we can be seen that way.

On an online forum for people with Aspergers, wrongplanet.net, one thread speculates that Jon Stewart, Larry David, Robin Williams, Steven Wright, and Mitch Hedburg all have signs of Asperger’s or at least utilize aspie humor. A couple users were certain that Andy Kaufman had Asperger’s. Andy Kaufman made up a language for his character Latka Gravas [Taxi], and became enraged when people spoke this language incorrectlyfor example, the actress who portrayed Latka’s bride, a poster named rivertrotter argued.

The concept of aspie humor was actually discovered in the 1940s by pediatrician Hans Asperger himself. In his paper, Autistic Psychopathy in Childhood, he argued that while autistic people do not understand jokes. (especially when the joke is on them). This can lead neurotypicals to wonder whether the subjects are humorless or just repulsed by verbal cruelty. Far from humorless argues Asperger that, due to their literal-mindedness, when making puns autistic people sometimes shine this can range from simple wordplay and sound associations to precisely formulated, truly witty remarks.

The main thing uniting most Aspies sense of humor is our wordplay, the group says, Because were not that interested in silent plays. Perhaps in the jovial atmosphere of 1940s Austria this sort of humor may have been considered hack, but in an era when irony and paraprosdokians (look it up!) are all the rage, autistic humor may at last have its chance to shine.

Another key to understanding the humor, the group argues, is to laugh with someone, not at them. Characters like Sugar Motta in Glee and Sheldon from Big Bang Theory are two notorious examples of characters who are mocked for their autistic traits. Abed Nadir from Community and Christian Bales depiction of hedge fund manager Michael Burry in The Big Short received more positive responses from autistic viewers.

For their trailblazing openness Aspergers Are Us has earned a large international autistic following, some of whom often write in to their Facebook page for advice on their own careers. But their humor is not made specifically for those on spectrum. Our comedy is written to appeal to the four of us in the troupe. If it makes us all laugh, it goes into the show.

A string of recent successes indicates they won’t be laughing alone. Since their early Brooklyn performance they have been covered in USA Today and The New York Times, and gained the attention of filmmaker Alex Lehman, who flew to Boston to make a documentary about the group. An early version of the film impressed famed mumblecore director and star of The League, Mark Duplass, who signed-on as producer. Variety called the films SXSW premiere among the buzziest of the festival, leading to a deal with Netflix, who will stream it this Fall.

Following the success in Austin, the group hired an agent and will go on their first major tour this summerplaying comedy clubs, not punk venues, with some high-profile openers. Joe Pera, whose slow-paced anti-humor recently killed on Late Night with Seth Meyers, will open their July 11 show at Carolines in New York. In Los Angeles, they expect to perform with Mark Proksch, who before his recent notoriety from Breaking Bad and On Cinema, confused morning news audiences nationwide as K-Strass to Yo-Yo Guy.

While theyre excited about the larger audiences and professionals running their light and sound, theyre also worried about dealing with drunk crowds. But hecklers are not their least favorite audience members. The group recalls a particularly annoying comment at their SXSW Q&A: A woman raised her hand and said, Im a principal at a school for children with autism, and I just want to applaud you for being so courageous. Noah just pointed to his I Dont Want Your Pity shirt and asked for the next question… What are we doing thats so courageous, having Aspergers? Thanks, lady, but that didnt take any effort on our parts, it was a gift.