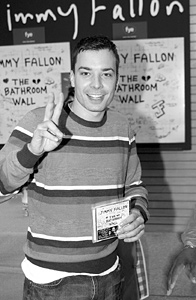 Everyone knows that messy hair on a man connotes “sexy,” “natural” and sometimes even “genius”–he’s so clever he couldn’t be bothered to comb his hair! So sayeth Fallon’s goofy, rumpled locks. But really. As if he really just rolled out of bed moments before “Weekend Update” or the Video Music Awards. It’s national television, for Chrissakes! Are we supposed to think there are no stylists? Whoever’s giving Tina Fey that helmet head needs to take a brush to young Jimmy. Fallon’s got one of the most annoying hairdos on television right now–though, to be fair, he’s got nothing on Justin from American Idol.

Grown men ought not to use diminutives. (Sorry, Sweeney.)

My irritation with Jimmy Fallon started with Spin‘s March issue. Seeing him lounging so insouciantly, grinning cockily like that cat that ate the cream or whatever, made my innards churn. It was the beginning of Fallon buzz, and he was probably getting laid like crazy just for being cute and about to be A Big Celebrity. How annoying. Which brings me to:

The evil, big media conglomerates are clearly pleased with their pre-packaged ball of adorability, hence they’re milking their little brown-eyed cow for all he’s worth. If you’ve been to NYC lately, you’ve noticed that Times Square has become a virtual shrine to Fallon. You can’t open a newspaper or a magazine without seeing that perky smile, and MTV plays that hideola video so much (see No. 7) that when I turned on the TV in the hope I could watch it for this story, it came on almost immediately.

Jimmy Fallon’s being pushed down our throats because, as those guys see it, he’s such a non-offensive, down-home kind of guy. He’ll work in Middle America, and his frequent references to college dorms, nostalgic impressions and the aforementioned mussed hair and puppy dog eyes make him a perfect figure for the wimpy post-Sept. 11 “sincerity.” He’s a Sensitive Guy whom chicks and teenagers, gay men and even straight guys love, insomuch as they are inclined to love anyone. But these are values of the moment, and Fallon’s star will surely fade as soon as people get an earful of …

The Bathroom Wall, released last week, provides near-irrefutable proof of Fallon’s over-ness. Three dumb songs peter out into Fallon’s oft-heard impressions of Chris Rock, Jerry Seinfeld and that Alanis Morrissette-troll-doll song, all of which serve to prove Fallon’s only actually funny when someone else is writing for him.

In the annoyingly unfunny “Idiot Boyfriend” video, Fallon changes costume numerous times, sings in a falsetto and humps the face of an old lady. Which brings us to the most annoying part about him …

8. His Lack of Originality

As a comedian, Fallon is pretty vacant. All he really does well is imitate people, and though he does this to a T, it’s not quite enough. And while his college humor is sometimes mildly entertaining, he doesn’t possess any of the qualities that made the SNL cast members he is frequently compared to stars: the sharp wit of Mike Myers, the wild do-anything-for-a-laugh energy of Chris Farley or the edginess of Chris Rock. Rather, Fallon trades on …

Of all the hideous celebrity behaviors, acting like you just “accidentally” became famous after you’ve clawed your way to the top tooth and nail is perhaps the most vile. In a recent interview with USA Today, Fallon, “slightly rumpled in brown Levi cords, black-and-white Pony sneakers and a red T-shirt worn inside out,” bemoans his lot in life: “My doorman is so tired of seeing my face.” Loathsome.