NEXT UP IN SEX

In the past 20 years, geek culture has skyrocketed in popularity. Genre entertainment such as comics, sci-fi, role-playing games, and anime has gone from niche to dominating pop culture. People say “nerdy is the new sexy” but we disagree.

Nerds have always been sexy.

There is no better place to experience this than comic book conventions, often called “cons.” While most picture cons as a mob of awkward virgins, nothing could be further from the truth. The reality is that cons are a bacchanalia of drugs, drinking, and kinky sex.

Make sure your Spock ears are glued on tight because things are about to get crazy.

Sexuality has always been prevalent in genre entertainment. Comic books are populated by statuesque bodies cling-wrapped in spandex and armor. Female presenting characters tend to show more skin and are drawn in scandalous poses, which draws some criticism.

For a fun skewering of this trope, look up “The Hawkeye Initiative” to see the arrow-slinging Avenger posed to match his more objectified female contemporaries. 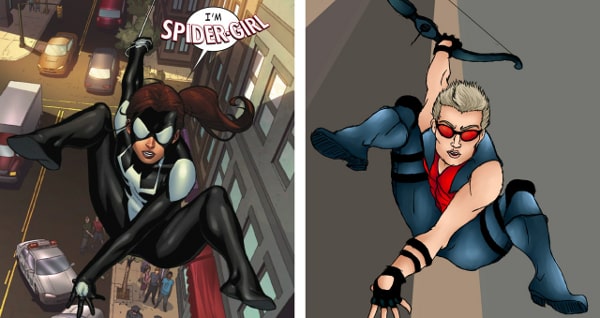 More than the occasional saucy splash page, whole books have been dedicated to sexy supes. Marvel actually published a Sports Illustrated-style swimsuit book in the mid-1990s.

Cis-het white men have been considered the core audience for comics and sci-fi, hence the near-exploitative treatment of women characters. In reality, fandom covers every race, gender, and sexuality.

Artist Lauren Wright specializes in pin-up style drawings of famous female characters. She says she doesn’t do it to please the “male gaze.”

“I get a lot of criticism, but I [make this art] because it’s nice to look at. They’re beautiful,” Wright tells me.

Take a stroll along the artist’s booths at any con, and there will be something for everyone. Queer romance features heavily, with gorgeous hand-crafted pieces featuring a dizzying amount of popular male characters in steamy scenarios.

Let us not forget that for as sexless as the MCU comes off, audiences are always treated to at least one male shirtless scene. As Thor director Taika Waititi put it, we “get our full Hems-worth.”

Fans develop a deep attraction to characters for more than their looks. Characters like Han Solo or Captain Kirk ooze charm and confidence. The personalities and journeys of fictional heroes allow followers an intimate connection. For some, it can lead to a person’s first crush or a sexual awakening.

Comic Book Conventions are generally weekend-long events filled with artists, panel discussions, costume contests, and parties. The freak flags fly high at these events, where fans can indulge in their fantasies and meet their heroes.

Before the MCU, Netflix’s Stranger Things, and the internet, reading comics or playing Dungeons & Dragons were considered uncool. Cons gave fans of SciFi and Fantasy a place to hang out with others with shared interests.

These events, typically held in a hotel, are also a chance to hook up for stellar sex. Sometimes interstellar sex. No judgments for those who want to bang a Borg.

Dragon Con: A Labor of Love (and Sex)

Starting in 1987, Dragon Con has become one of, if not the, largest independent fan conventions in the world. With almost 100,000 attendees in 2019, people from around the globe travel to celebrate.

What was once a few conference rooms 35 years ago now takes over several blocks of Atlanta’s downtown.

This five-day event offers separate “tracks” with multiple panels and events. The tracks can get impressively specific, from Star Trek or Marvel to Skepticism and Militaristic Speculative Fiction.

It’s more than the plentiful offerings that keep people coming back. “It’s the vibes,” says Chris, a 15-year veteran of Dragon Con. “Everyone is just here to have a good time. No one’s being judgy or mean. We’re all here for the same reason.”

Dragon Con does give a warm and accepting vibe, with whole tracks devoted to inclusion and minority representation. There’s even the famed Candyland Rainbow Party for queer geeks to dance and drink the night away.

Body positivity is also a cornerstone of the experience. There is no room for snarky or rude behavior toward thicker fans. All shapes and sizes are cheered on in their cosplay, encouraging those who usually feel self-conscious to strut their stuff.

At every venue entrance are signs that detail rules about unsolicited sexual behavior. An axiom of conventions is “cosplay is not consent”. Just because someone only wears a thong and metal bra does NOT mean you can touch or harass them.

While creepy behavior is swiftly punished, that doesn’t mean adult fun is forbidden—quite the opposite.

Many attendees looked befuddled when told that the idea of “cons as giant sex parties” is not well known.

“What do they think happens? That’s, like, why we’re here.”

Everyone knows why, at least in part, they are here. The organizers are also in on the fun.

The con-goers are not the only ones who know how to have a good time. Other cons may have an unspoken element of 18+ revelry, but Dragon Con puts it front and center.

Since families and children attend, the panels and events use the concept of a “watershed hour.” Everything is kept relatively clean until 10pm.

After that, the floodgates open.

Some events, like Intimacy in SciFi, feature high-minded discussions of adult entertainment, technology, and narrative tropes. Others, well, devolve into a room filled with sexually frustrated shouting.

Not to judge anyone, but… ew.

Returning to something more wholesome and inclusive, there is even a scheduled meet-up for Furries. It is almost inspiring to see so many wearing thick, clunky, fur-covered suits in the Georgia heat. 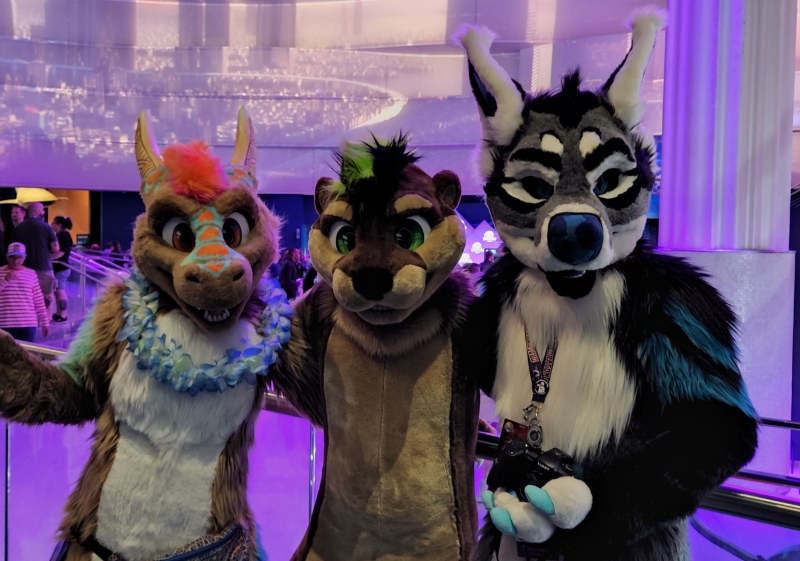 It may not be your cup of tea, but you must respect their commitment.

Speaking of the Georgia heat, one famous event is Pin-Ups By the Pool. Folks can cool down and show off by mixing the Pin-Up girl aesthetic with their favorite fandom. Think zombified Bettie Page or Rosie the Riveter meets Rosie the Robot.

Men in kilts are a dime a dozen at this con. One event puts a fun spin on the tired “wet T-shirt contest” and lets women turn the tables with leaf blowers at the annual Kilt Blowing Contest.

Adding some spectacle to the spiciness is Dragon Con’s Burlesque showcase. Performers from around the country combine geekiness with glamour in an adults-only revue. The line for this one fills up more than two hours before showtime, leaving hundreds of disappointed fans outside.

Themed parties are a mainstay of Dragon Con. Like the LGBTQ-themed Candyland Party mentioned above, there is the Trek-inspired Ten Forward Party or the spooky Open Casket Party for Horror fans. All of these bashes feature DJs, drinks, and cosplay.

However, the biggest dance party is the legendary Bunny Hutch. 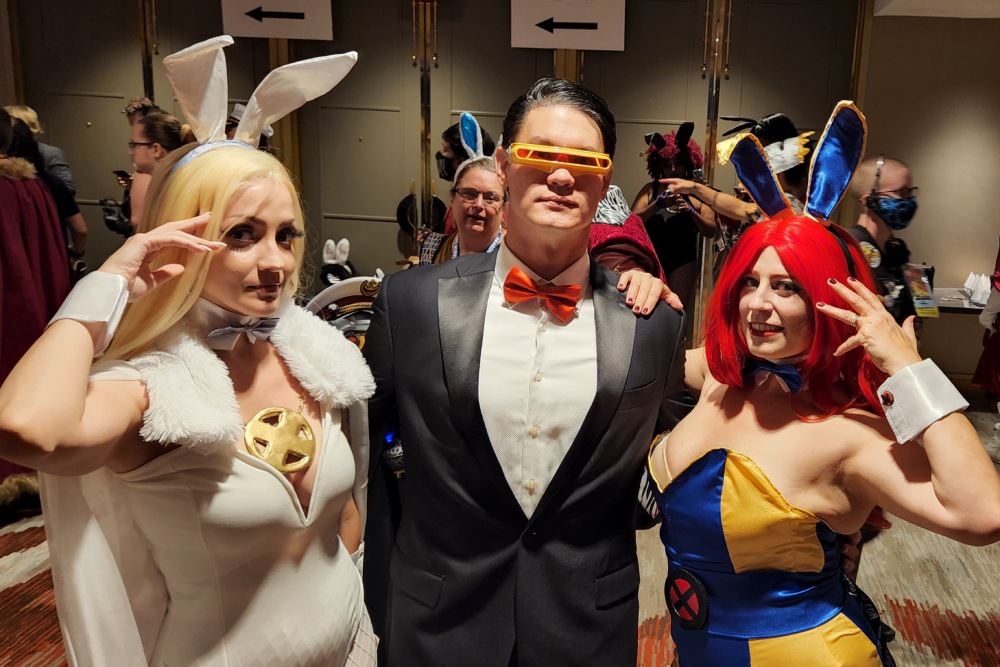 What started out as a fan-created romp, Bunny Hutch serves up tongue-in-cheek fun with vintage Playboy Mansion style. This party will get you close if you’ve ever wanted to experience a key party at the Justice League Watchtower.

Bunny Hutch is one of the more openly sexual events. Every person going to this ballroom knows why they are here. Hooking up is a significant enough aspect that free condoms can be found lying around the water coolers. 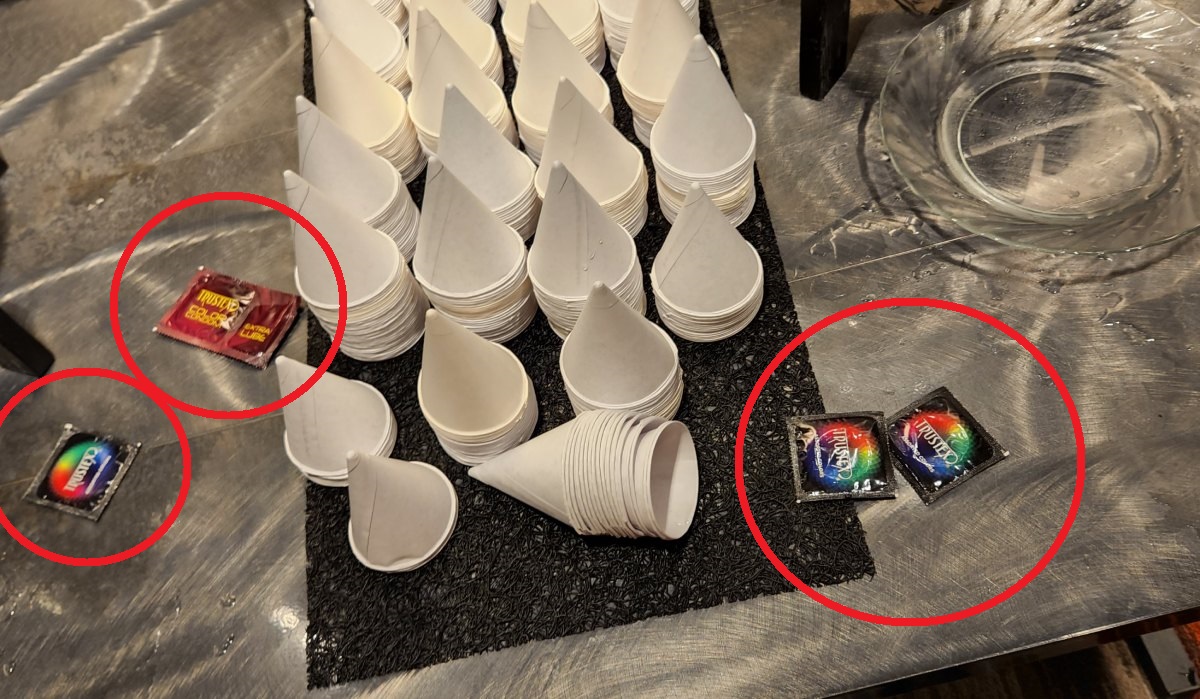 Costumes typically feature a themed corset and bunny ears or a spin on Hugh Hefner’s signature smoking jacket. Like the other parties, a competition is held for the best and most original look. 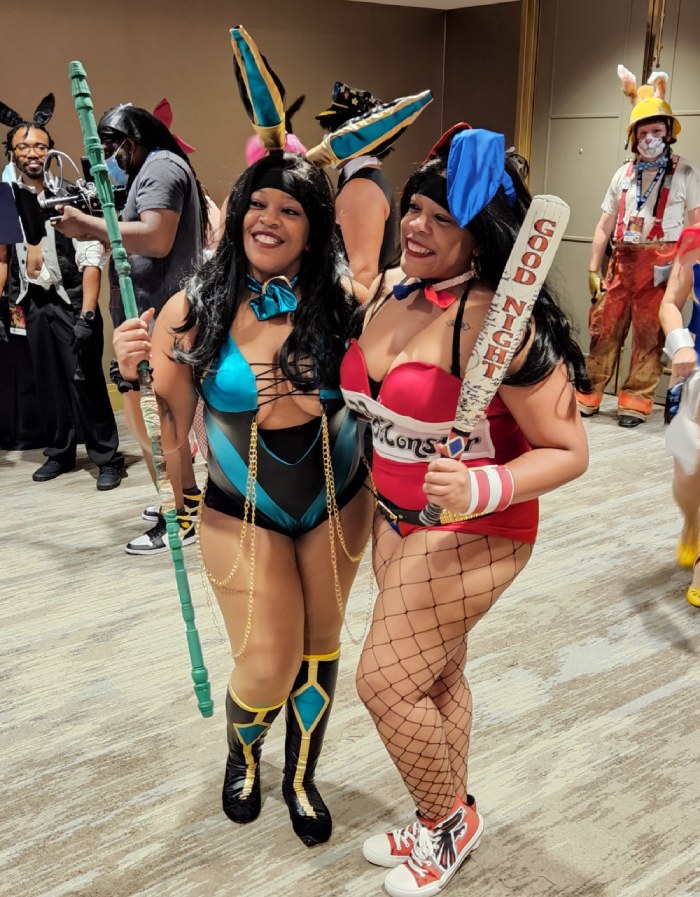 Competitors can skip the hours-long line, but they better bring it. Judges have no patience for low-effort cosplay, turning away people obviously in it for speedy access.

“The judges know when you’re just trying to get in quick,” said a Hulked-out Heff waiting outside, “It takes more than a body suit and some Spirit Halloween rabbit ears.”

Anyone who thinks they can get away with a store-bought look is kidding themselves. Seductive cosplay is about more than boobs, butts, and abs. It takes real creativity and craftsmanship. 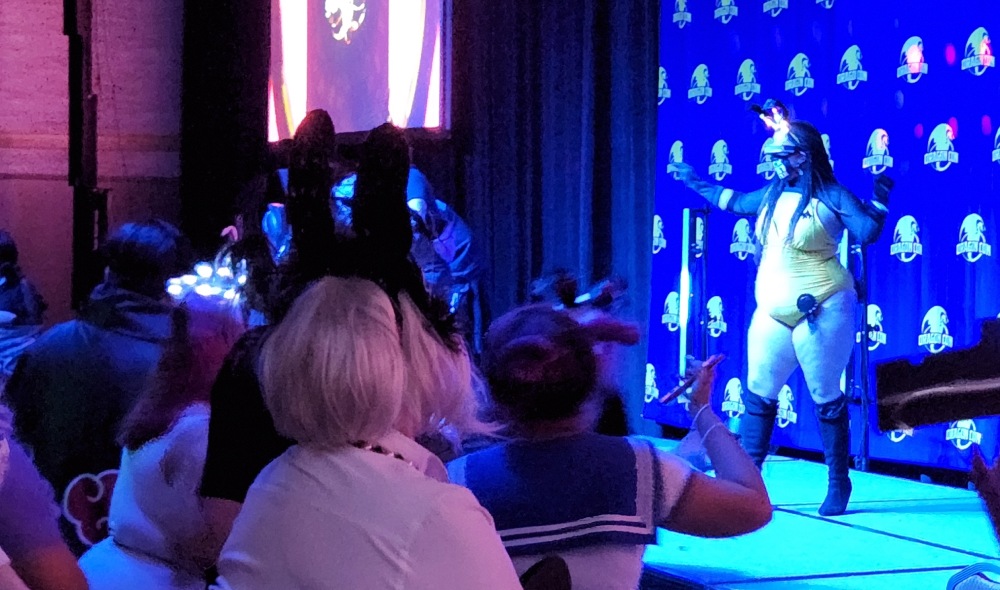 Cosplay: The Art of Dropping Jaws

During one of his panel appearances, Special Effects legend Russ Adams said:

“Have you seen the Iron Man suits people make, with all the mechanical parts working? When they shoot those movies, and they need a flap to move or something, there’s just one specific piece for that one shot. These guys have homemade suits that do all  of it, and it works!”

Cosplay is a genuinely astounding art form. It takes immense resourcefulness, creativity, engineering, and patience. May the old Gods and the new bless those who make the fantastical real and really hot.

In recent years, custom-printed spandex bodysuits have become widely accessible. These super suits may cover from head to toe but leave little to the imagination.

When someone decides to make the last thing anyone would think of as sexy, that is truly special.

This year, there were dozens of fear-boner-inducing versions of the ghost with the most. Downtown Atlanta was lousy with bangable Betelgueses. Or Betelguy? Betelgeese? Whatever the plural is, we were all here for it. 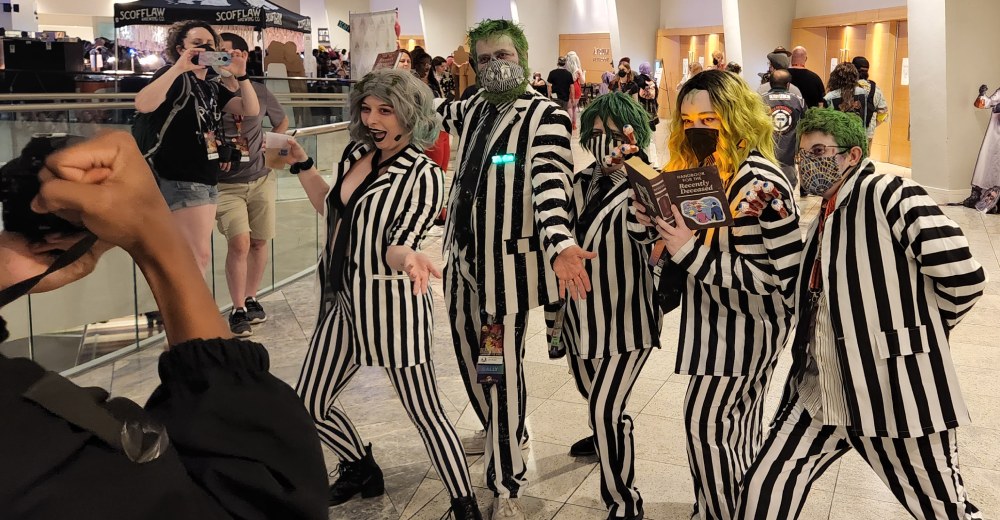 From Alien to Zissou, fans were pulling from some deep benches to express their wild side. Walking through the hotel lobbies was “rule 34” brought to life.

Some cosplayers would lean more into an aesthetic like Dark Fantasy instead of basing their drip on a character. Custom armor, prosthetics, and detailed leatherwork would inspire anyone to start a role-playing dungeon of their own.

Donning a costume can be a kind of foreplay itself. Marching forward with a cape flowing behind inspires a sense of empowerment. Those normally shy about wearing tight or revealing outfits are cheered on by others doing the same, making them feel desired.

An awkward geek who regularly dresses in a plain hoodie can slap on some vibrantly colored tights, check themselves in the mirror, and think, “Goddamn I look good!”

You Wanna Get Nuts?! Let’s Get Nuts.

Kink and gender-bending are common in this world. Ironically, self-expression is a major part of becoming someone else. 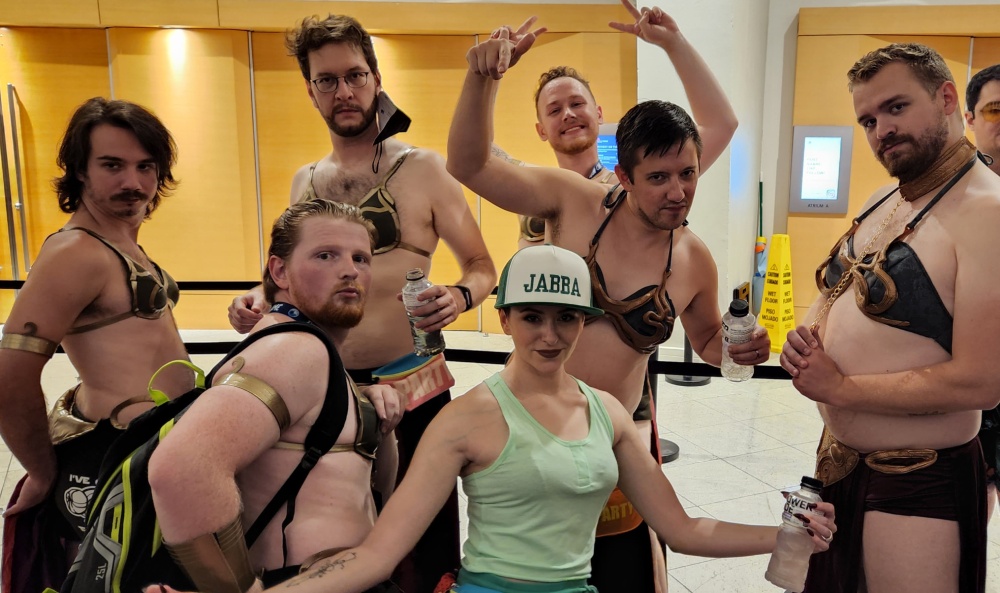 Other outfits boast a different kind of fun. Wandering around the convention floors, it wouldn’t be out of place to see a Dom Daddy Cruella D’Ville or a bald and busty Dr. Robotnick.

Life-long fans, especially queer ones, of niche nerdoms are used to feeling like outsiders, and cons are a rare, safe place to lean into their unique passions.

It’s Always the Quiet Ones

Comic Book conventions, especially Atlanta’s Dragon Con, are a place for fans to be themselves and have fun. For some, that fun may be tabletop games or art collecting, but many others are looking for something more raunchy.

SciFi/Fantasy is full of sexiness, and cons are a welcoming environment to celebrate the spicier parts of fandom. Defying stereotypes of being undesirable dorks, genre fans of all genders, sexual identities, and body types party hard and are down to clown.

A hotel brimming with inventive and kinky costumes, a joyful atmosphere, and raucous parties is a recipe for adult adventure.

Next time some jerk says, “I was too busy getting laid to read comics,” remember that nerds are indulging in both and having a blast.

Badass with an axe.

Blackbeard and her faithful Steed.

Glad these two are getting along...