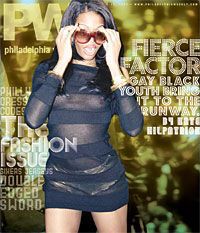 When it comes to balls, there are mini balls, big balls and major balls. The 12th annual Dorian Corey awards being held on this evening in West Philly is a major ball–named in honor of the legendary Harlem queen from the golden age of drag.

Emannuel “Mann” Prodigy, 35, father and founder of the House of Prodigy (think gay fraternity minus the frat house), is putting the finishing touches on the red-and-gold table decorations in Lancaster Hall at 51st and Warren streets, the spacious but not-so-glamourous venue for tonight’s totally glamorous ceremony.

It’s nearly 2 in the morning, and the ballroom community is just starting to make its way through the doors and thorough security pat-downs.

Men with braided hair and hoodies lead their voluptuous transgendered girlfriends around the room by the hand, while butch lesbians remove their fitted hats to reveal crisp barbershop shape-ups. Young divas of all genders with flawless skin and perfectly arched brows strut their sex appeal. In the language of ballroom they’re here to “bring it” and “serve the runway”–showing off their “fierce” outfits, “fabulous” figures and “cunty” attitudes in honor of the legends who’ve walked before them.

“This is like the gay Grammys,” says Prodigy. “It’s the fantasy life of being a celebrity.”

This West Philly scene may be familiar to anyone who remembers Madonna’s 1990 hit single “Vogue,” or Jennie Livingston’s Paris Is Burning documentary from the same year.

But the roots of this artistic ghetto performance extend much further back, to the 1920s and the Harlem Renaissance.

Back then Harlem was an epicenter of gay activity, one of very few places where black gays and lesbians weren’t alienated from their community. Sexual orientation was secondary to shared skin color.

The balls continued into the ’60s and ’70s, and many drag queens perfected the art of looking soft and feminine without ever undergoing gender transformation surgeries or any of the hormone therapies available today. Back then a man wearing a dress in daylight was reason for arrest. Drag queens didn’t dare leave the club before taking off their clothes, wig and makeup.

When the House of LaBeija–the first ballroom house as we know them today–formed in 1970, the ball scene was still a drag queen-dominated spectacle. 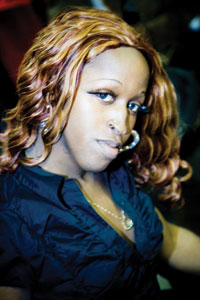 The golden age of ballroom came in the ’80s when (now-deceased) legendary icons like Angie Xtravaganza, Dorian Corey, Avis Pendavis and Pepper LaBeija ruled the runway.

“When they said they brought everything but the kitchen sink–that’s a lie. They brought the kitchen sink too,” says Kevin Omni, a ballroom educator with nearly 30 years in the ballroom scene. Omni remembers the icons of drag pulling up with U-Haul trucks stuffed with outfits and performance props.

“The memories are just so interesting from the early and mid-’80s,” says Omni. “We held on to that cabaret style and that vaudeville effect. Miss Avis, Dorian and Pepper were seamstresses. They hand-beaded and hand-painted and bugle-beaded and rhinestoned … Oh baby, they was carrying!” 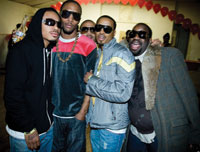 Omni says the grand prize category was the crowd favorite because you never knew what was going to happen. “I’d be on the microphone going, ‘Miss Avis? Miss Avis, are you coming? Category going once. Category going twice. Miss Avis get out here now!’ By the time she hit the beginning of the runway to the time she got to the judges’ panel, she had peeled [off a different outfit] 20 times. She’d pop off the sleeves, rip off the bottom of the dress, pull the pant legs down and change the outfit inside-out … ”

Omni calls today’s ballroom scene a watered-down version of what it once was, and wishes the original ballroom icons had received mainstream recognition.

“They’d come in with comforters and bedroom sheets, honey, and make the most overwhelming gown,” he says. “They had talents that were so unreal. Them dying and only having a ballroom career really just pisses me off.”

Legendary vogue femme diva Pony Blahnik, former member of the House of Blahnik, says the ballroom scene was created for gay people to express themselves and be accepted.

“If you look at the categories–like Butch Queen up in Pumps, where men walk around in poom-poom shorts and heels–society wasn’t ready for that. People can walk down the street and be nobody, but they walk a ball and they’re like God–everyone knows them, everybody loves them. The ballroom scene is an exit for pain and suffering–because [the participants’] parents throw them out, and people in the street throw bottles at them for how they express themselves. That’s why people live their lives for the next ball.”

In the late ’80s the ballroom scene worked its way from New York City to Philadelphia when Michael Gaskins opened the House of Onyx. The first Philly ball was held in 1989 at the YMCA at 20th and Chestnut streets.

Ballroom culture soon began to sprout up all around the country, with Chicago, Atlanta and Los Angeles becoming major ballroom destinations. Today a ballroom community exists in nearly every major city.

Though Gaskins debuted the balls in Philly, Alvernian Prestige kept them going.

Prestige, then 17, had been in the House of Onyx only a few months when he branched off and created his own house–the House of Xavier–in 1990. Shortly after, he closed Xavier and opened the House of Prestige, now the oldest ballroom house in Philly.

By the late ’90s ballroom had peaked in Philadelphia.

“Philly had become the ballroom mecca. The scene originated in Harlem, but Philadelphia kind of took the ball and ran with it,” says Jay Manolo Blahnik, father of the New York- and Philly-based House of Blahnik.

But with the proliferation of houses, branches and competition, egos soon collided and rivalries flared, breaking the very unity the scene had been created to foster.

“With the high prevalence of violence that occurred [within the ballroom community] for a while in Philadelphia, people just stopped coming into the city for the balls,” says Blahnik.

But even with the number of balls dwindling, ballroom houses and culture didn’t disappear from Philly completely–perhaps proof that the ballroom community isn’t solely about winning trophies. More important is the surrogate family it provides young gay men and women of color, a family that accepts their sexuality and nurtures their development on and off the runway.

The community has always been a refuge for kids rejected by their biological families. Often compared to fraternities and sometimes even gangs, the ballroom scene is both a social and support network. Young men and women who don’t have gay friends, family members or role models can meet people dealing with the same issues.

A house’s mother and father (chosen regardless of gender) become the members’ physical, emotional and spiritual leaders. If a ball kid is depressed, struggling financially or having trouble in school, the mother and father are there to help.

This can be particularly important in light of hip-hop culture, which sometimes flaunts hypermasculine ideals and unapologetic homophobia. Ballroom is a safe place where butch queens, femme queens, drag queens and transgenders can talk, walk and snap their fingers however they want.

“Being from the projects, I had to hide my sexuality a lot,” says Father “Mann” Prodigy, founder of the House of Prodigy.

In his senior year of high school he was introduced to a family friend he describes as “flamboyantly, openly gay.” Mann felt comfortable opening up about his sexuality. The friend introduced him to some ballroom kids, and soon Mann was bringing home trophies.

He quickly found a confidence he never felt growing up.

“I was always picked on because I have really dark skin, never because I was gay,” Mann recalls. “They’d call me tar baby, every name black people call each other. That used to hurt me real bad when I was younger. But then I walked in a ball and everyone was clapping for me. The ballroom circuit really boosted my ego.”

He became the undefeated winner of the Butch Queen Realness category.

After short stints at the House of Ultra Omni, the House of Ungaro and the House of St. Clair, Mann joined the House of Ebony in 1994. “That’s where I blew up,” he says. “I only had a little name at the other houses, but while I was at Ebony, I started winning more.”

In 2002 Mann branched off of Ebony and opened the House of Prodigy.

As house father he tries to keep his members “more family-oriented” than some of the others by organizing picnics, bowling nights and sleepovers.

If a kid in the house is having problems with schoolwork, Mann will find him a tutor. If it’s problems at home, he’ll speak with the parents.

“A lot of young kids think they’re grown at 18,” he says of his parenting role. “I have to tell them, ‘You’re not grown until you’re on your own and have your own lease.'”

Despite growing up surrounded by drugs, Mann never smoke, drank or used drugs. “I was my mother’s good child,” he says.

And he doesn’t tolerate underage drinking or drug use in his house either.

“Mann is what you call an all-around-type father,” says 24-year-old Jacen Prodigy, who left Ebony to join Prodigy. “He’s your father, he’s your brother, he’s your friend. He can even be your mother at times. It’s about more than just a trophy to him. Even right now when I’m telling you all this stuff, me and Mann aren’t even speaking,” he laughs. “But he’s a very good father. And he’s the main male influence I have in my life.”