Skip to content
Fourteen years ago, when Morjorie Newlin was 72, her neighborhood supermarket had 50-pound bags of kitty litter on sale. Without anyone to help her carry the bags back to her house, she struggled mightily under the load. Never a particularly athletic woman, but staunchly independent, she decided that she had to do something about her deteriorating physical capabilities.

Though osteoporosis was also on her mind, the septuagenarian began lifting weights — for her cat. 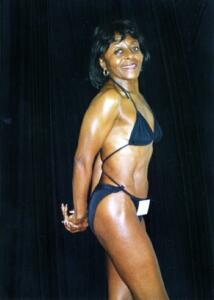 “I want to be as independent as I can be, for as long as I can,” says Newlin, a great-grandmother and retired nurse who turns 86 tomorrow. “I just want to do things for myself.”

After 13 years of weight training, Newlin is more than taking care of herself. At her two-story home in Mt. Airy, Newlin, who runs up the stairs with the sprightliness of a 10-year-old, has a room dedicated entirely to plaques, certificates and trophies (some almost as tall as her) from bodybuilding competitions that have taken her as far away as Italy, France and Germany. She’s won more than 40 trophies in her late-blooming career. “There are so many, I don’t know what to do with all of them,” she says.

“I chuckled when I saw this little old lady walk inside the gym,” says Richard Brown, a personal trainer at Rivers Gym in Mt. Airy, where Newlin began her training. “I was a little leery. I was just training young athletes at the time.”

The little old lady quickly showed him what an older athlete could do.

“She kept coming in day after day, week after week, and month after month,” Brown remembers. “She didn’t want to do ‘girly’ workouts. She wanted to train with us fellows.”

“After a few months of training, I looked at her physique and knew she was ready for a [bodybuilding] show,” he continues. “She definitely had something to show.”

Newlin was bench-pressing 65 pounds when she was 73 years old. A year later she was throwing up 85.

The bodybuilding competitions are broken into two divisions. Newlin’s first competition was in the Amateur Athletic Union, which is open to the public.

Newlin recalls being a little reluctant when she saw the string bikini she’d have to wear in front of the bodybuilding audience.

“I knew the contest meant a lot to my trainer so I went along with it,” she says. To everyone’s surprise, Newlin won. The crowd went crazy on hearing she was 74 years old.

Newlin began her competition career in that AAU’s Master’s Division, which splits contestants into two categories: under and over a certain age limit, usually 35 or 45 years old. Newlin obviously fell way over the dividing line, wherever it was set, but was competing and winning against women half her age.

“I was always the oldest in all my competitions,” says Newlin.

The daughter of very active Barbadian immigrants, Newlin admits that athleticism is in her genes: “My family is used to walking and running long distances.”

Although she’s taking a break from bodybuilding competitions for now, Newlin is still training at least three days a week, now at Bally Total Fitness in Cedarbrook, and can still throw down with the best of them. “I could bench-press 90 pounds with a spotter. I can dead lift 95 pounds. I can squat 135 pounds,” says Newlin.

She’s been featured on Oprah and The View, and has appeared in commercials in Barbados. She spends her time out of the gym as a motivational speaker at schools and banquets, discussing the importance of exercise, weight training and dieting. “A lady called me earlier this week from Hawaii,” Newlin says. “She asked questions about how to use weights.”

Though some in her position might wonder how much longer they can keep it up — or how far they might have come if they’d started earlier — those questions never cross Newlin’s mind. “Every day is different. The next day will take care of itself,” she says with Zen-like calm.

“Age is only a number,” says Brown. “There is only one Morjorie Newlin. … She could do this for as long as she wants.”

Up Next in Philadelphia City Paper Archives