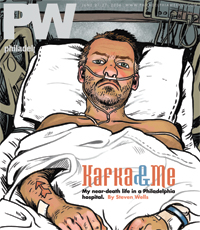 A man gets lost in the Philadelphia health system “What is this, fucking Kafka?” and lives to tell about it.

I’m writing these notes in the ER blitzed off my tits on Vicodin and synthetic heroin. Outside in the corridor some poor bastard who got crushed by a bowling ball stacking machine is screaming like a baby with Tourette’s.

I should be experiencing compassion but instead I’m feeling disappointed. I’ve been brought up by American TV to expect the stabbed, the gut-shot and the Mafia-kneecapped to be fistfighting with the gangbangers, the crack addicts and the self-mutilating anorexic Goth chicks in ER waiting rooms. Instead there’s just lots of very fat people feeding McDonald’s to even fatter children.

Maybe we should start the story here.

The story also features Kafkaesque data chases, a scrotal sac swollen to the size of a football, glimpses of oak-paneled $300-a-night posh-patients’ rooms where protein shakes come in silver salvers, the horror of the catheter they stick down your cock (and this is legal, why?) and the nightmare foot-long scented candle of compacted fecal matter that was so hard to shift that I collapsed and had to be given oxygen the first time I tried.

Seriously, having experienced everything from industrial-strength stool softeners to the same anxiety and pain relief medicine they issue to medics in the Marine Corps, I have to wonder why anybody in America would ever take crappy street drugs. Join the Army and get shot. It’s got to be cheaper in the long run, and it’s totally legal.

Did I type that out loud? I’m sorry. It’s the synthetic heroin. It’s great but it does have the unfortunate side effect of turning you into an emotional Republican.

The ER doctor says he wants to drill a hole in my back, stick in a tube and suck all the blood and gunk and puss out from under my lungs. I’m like, “Yeah, like, whatever, man.” So he does. And half an hour later I’m staring at a plastic bag filled with two and a quarter liters of what looks like Bloody Mary mix.

Hey, I do have a good ending, though. That bit I just wrote about the “free drugs”? Total nonsense.

Weeks later–weeks during which I nearly die, become hideously deformed and then spend entire days crying like a baby–the wife and I are in the elevator in our apartment building when she opens the bill from our bat-shit crazy American insurance company.